The Coaches’ Trophy presented by Dr Pepper, which was awarded to Alabama on Monday night January 9th, as the 2011 national college football champions, will be on display this weekend at three locations in Alabama. Fans will be able to have a free on-line photo taken with the actual Waterford Crystal football trophy won by the Crimson Tide at the Allstate BCS Championship 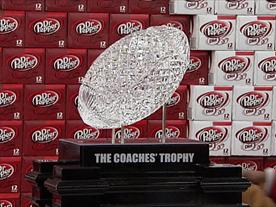 *    The ball that sits atop The Coaches’ Trophy is designed and manufactured by Waterford Crystal in Ireland. The trophy is valued at $30,000 and takes three months to produce.

*   Every year, a new Waterford Crystal trophy is made. Each winning school keeps The Coaches’ Trophy for permanent display on campus.

*   Created in 1986, this is the 26th year the American Football Coaches Association has awarded the trophy to the national champion.