Whether he knew It or not Christopher Phelan was almost predestined to become an apprentice cutter here with us at the House of Waterford Crystal. “I have pure Waterford Crystal history running through my veins”, says Chris. “My father Jody Phelan was a Master Cutter in the Kilbarry factory, he moved in to a supervisory position in the cutting shop and my mother Miriam Mac Auliffe (RIP) also worked in the Kilbarry plant.” His mother’s father (Chris’s Grandad) John Mac Auliffe was also a Master Cutter with Waterford crystal, his uncle Chris (Master cutter) and Terry. Chris is a third-generation cutter at Waterford Crystal. It took a little while for the plan to come to fruition, even though he grew up surrounded by Waterford Crystal, cabinets filled with the pieces created by his Dad, Grandad and Uncles, in his own home and in both grandparents homes, Chris says “It never entered my head that I would one day be cutting crystal at Waterford too !!!” 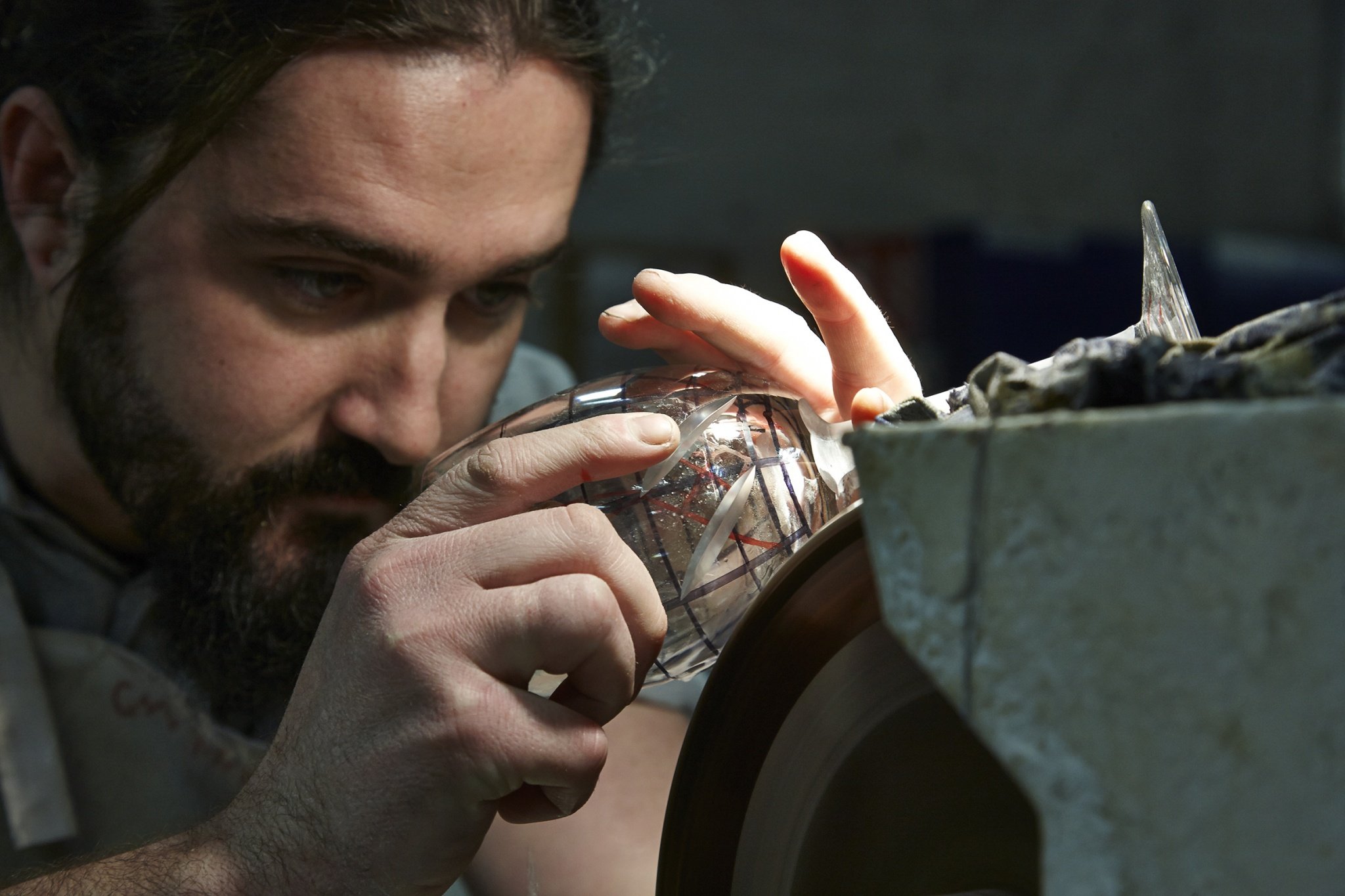 Chris finished school and went on to follow his passion for Art, he attended Waterford Institute of Technology and obtained his degree in Visual Arts. Having obtained his degree Chris went down various routes using his qualifications to set up an Art Studio in Baileys New street in Waterford City. When the studio closed he went on to work in Red Kettle Theatre as a technician, Chris then went on to work in Central Arts, curating works, setting up exhibits, organising the display and installation for the exhibitions and event managed the launch nights for numerous exhibitors.

In 2014 the news that the House of Waterford Crystal were recruiting apprentices broke. This was great news in the city, as these were the first apprenticeships to be offered in over 25 years. Chris’s Dad, even though retired from Waterford Crystal always kept an interest in what was happening, so on hearing this news thought of his son. He knew this job would be the perfect for his very talented artistic son. Chris applied along with many others for the position. The recruitment process was intensive, the men/women who applied for these positions needed to be committed to training for several years. Chris was both excited and nervous when he was told he was successful in his application. “There is something very prolific about walking in the steps of your forefathers,” Chris says.

Chris started his training in 2014, it must have felt strange to be surrounded by Master Cutters who had trained and worked with his dad and his grandad. Chris likened the experience to ‘arriving at a destination you didn’t know was included in the Itinerary but feeling very much like it was always part of your journey’. The training for our apprentices is very much ‘Sit by Nellie’ style training, where the apprentice watches the Master craftsmen at work and do as they do. Chris enjoys his training and mentoring with the team of Master Cutters, he is intrigued by all the different techniques used by the individual cutters. He loves that it is hands on training, the artist in him enjoys the attention to detail and the precision involved in creating each piece. 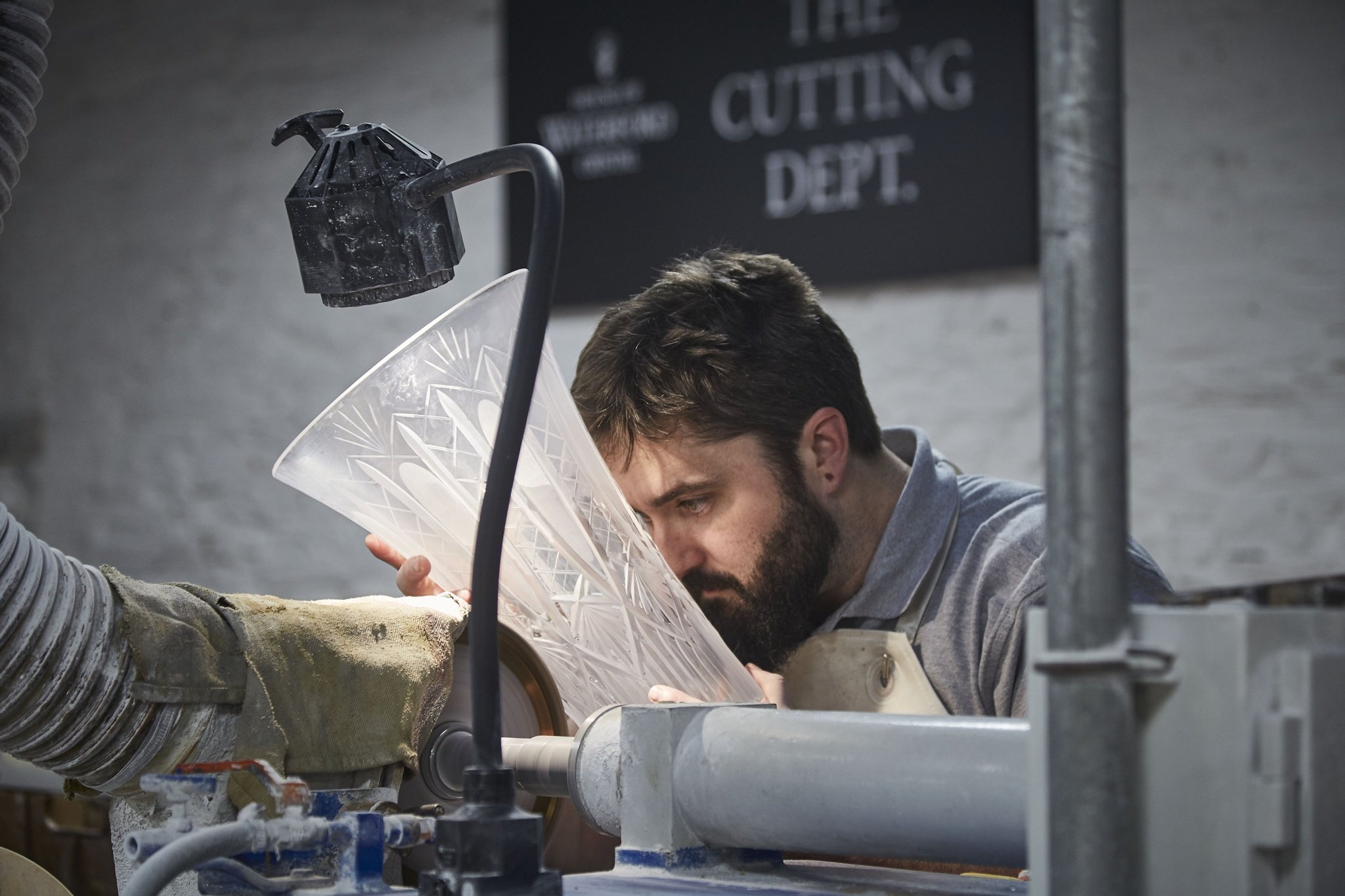 At the end of each year of training, our apprentice cutters are given a bowl to cut as an examination of the skills they have mastered, starting in year one with the Lismore (318), which is cut using one diamond wheel, each year the test piece becomes more difficult, incorporating more intricate designs requiring more wheel changes. The final year bowl is the apprentice bowl designed by Miroslav Havel, this bowl has ten-wheel changes and 600 individual cuts, a very difficult test for Chris and his fellow apprentices. On the day of the exam the apprentices were given three blank bowls to work on, two of the bowls were used to practice on and the third bowl becomes the exam piece, Chris was given 8 hours to complete the bowl, which he successfully cut earlier this year. 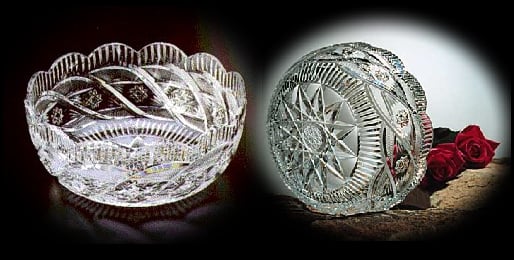 In October 2019, Chris our 3rd generation cutter will officially qualify as a craftsman here at the House of Waterford Crystal, a great achievement. Chris will go on to train for a further three years to become a Master Cutter, following in his dad and grandad’s footsteps, forming quite the Waterford Crystal dynasty of Master cutters.

Chris has also become the 'Face of Waterford Crystal' with his image promoting the guided factory tour on the Aircoach in Dublin, our adverts in publications like Aer Lingus Cara Magazine and also on our Waterford Crystal  brochure.