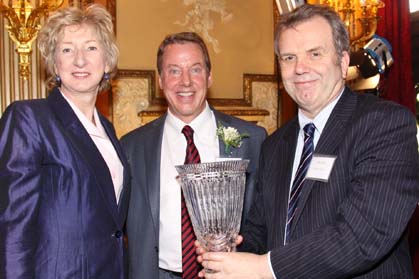 William Clay Ford Jr, the great grandson of Henry Ford was presented with the House of Waterford Crystal Cliffs of Moher vase on Thursday at Irish America magazine’s 26th Annual Business 100 Awards Luncheon at the Metropolitan Club in New York. He was also inducted into the magazine’s Irish America Hall of Fame.

He proudly remembered how Henry Ford had insisted that the company open up an automobile factory in his ancestral town of Cork in 1917 despite opposition from his board. As a result the Ford Company in Ireland was known as Henry Ford and Sons, not the Ford Motor Company.

At its height it employed 8,000 Irish workers and closed in 1985. At the luncheon, the Ford scion was also presented with a Certificate of Irish Heritage, a new initiative by the Irish government to acknowledge those who are not eligible for Irish citizenship but who are proud of their Irish roots, by Consul General Noel Kilkenny.

Ford, is the current Chairman of the Ford Company and great-grandson of Henry Ford the founder of the Ford Motor Company.

The Irish America Magazine’s annual Business 100 event, honours the best and the brightest Irish-Americans of the corporate world. The honourees represent a wide range of the most influential and innovative companies, including twenty-seven of the 2011 Fortune 500. Three of the honourees are among Forbes magazine’s 2011 Most Powerful Women in the World.