The Aer Lingus College Football Classic 2016 was one of the main features at the ACC Kick-off event in Pinehurst Resort in North Carolina as the specially designed Waterford Crystal trophy was unveiled. 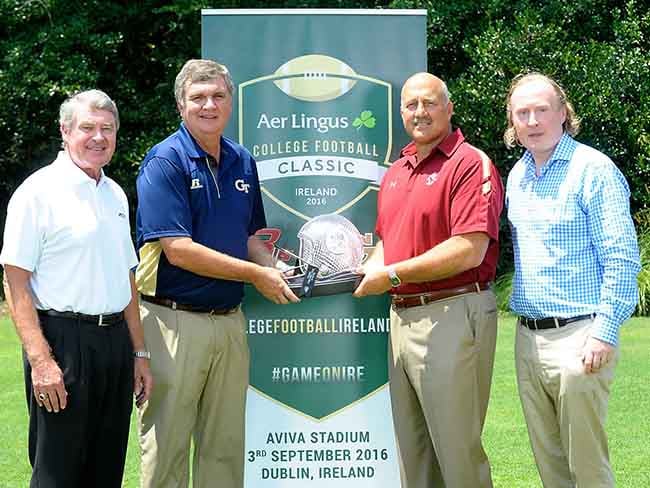 The Aer Lingus College Football Classic, which will take place in the Aviva Stadium on Sept 3 2016, will be the opening game of the college season, which will have a live TV audience in excess of 1.4 million United States viewers on ESPN. With just under 14 months until the big game, Boston College’s Coach Steve Addazio was asked yesterday what his thoughts were about the upcoming game.

He said “We're excited about the opportunity to go to Dublin, play in Ireland. We're going to have the chance to go to a different country, be exposed to a different culture. Going to Dublin to play a football game against Georgia Tech, for our players to experience this, I think is an unbelievable growth opportunity and an experience they'll have for the rest of their lives. We're fired up about it. “It's a long way away but time moves so quick. Next year I'll be standing right here talking about that game which will be a matter of weeks away.

It is certainly going to be a great opportunity for BC, Georgia Tech and the ACC.” Boston College Head Coach Steve Addazio, Georgia Tech Head Coach Paul Johnson, the ACC Commissioner John Swofford and Padraic O’ Kane CEO of Corporate.ie, the joint promoters of the game, were all on hand to show off the hand-crafted piece. The trophy, which was designed and hand crafted at the Waterford Crystal factory, is a crystal replica of an American football helmet.

This crystal trophy was designed by Billy Briggs, who captured the true classic shape of the American football helmet. The piece was mouth blown and hand cut using traditional manufacturing techniques. The diamond cutting across the surface of the helmet allows the light to catch it, in order to create the magical sparkle, associated with Waterford Crystal.

The Aer Lingus College Football Classic 2016 game is being organised by a new entity called Irish American Events Ltd which is a joint venture between Corporate.ie and Anthony Travel who have been involved in the recent college football games in Ireland.