Did you know that Waterford Crystal has been outfitting the Times Square Ball with brilliant crystal panels since the 2000 New Year’s Eve Celebration? 2017 will mark the 18th time that Waterford Crystal has been a part of the most iconic New Year’s Eve tradition.. and it keeps getting better! Each year, millions of eyes from all over the world are focused on the sparkling Waterford Crystal Times Square New Year's Eve Ball. At 11:59 p.m., the Ball begins its descent as millions of voices unite to count down the final seconds of the year, and celebrate the beginning of a new year full of hopes, challenges, changes and dreams. 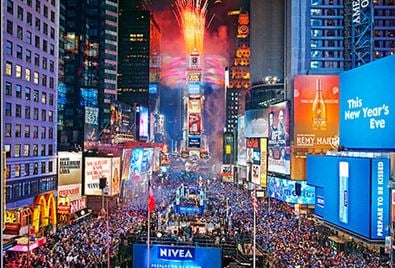 In Times Square 2014, all 2,688 of the Waterford Crystal triangles introduced the new design Gift of Imagination and conclude in 2023 with the “Gift of Love,” each year the Waterford Crystal triangles will depict a “gift” – a theme of global aspiration whose value is universally treasured. The triangles feature a series of intricate wedge cuts that appear to be endless mirrored reflections of each other inspiring our imagination with a kaleidoscope of colourful patterns on the Ball. 2015 is the "Gift of Fortitude”.

For the 2018 New Year's Eve Ball, 288 new Waterford Crystal triangular glass panels will be featured and introduces this year's theme - Gift of Serenity - a crystal cut pattern design that celebrates the thoughts, deeds and reflections that provide tranquility, peace and composure.

Just before the 2017 New Year’s Eve Ball drop, 288 “Gift of Kindess” Waterford Crystal triangles will be installed on the Times Square Ball. This continues to happen throughout the 10 year time-frame of the “Greatest Gifts” series, culminating in 2023, at which time there will be a magical combination of all 10 Waterford Crystal pattern designs surrounding the ball. Perched high above Times Square, this crystal quilt-work of varying patterns will symbolize the World’s Greatest Gifts, serving as inspiration to all across the globe.

The unique crystal longboat, a replica of Skuldelev Viking Longboat took over 300 hours to complete. It was custom built at the House of Waterford Crystal’s factory by Master Sculptor Michael Murphy to coincide with The Tall Ships event in Waterford city, which took place over the weekend of the 30th June to 3rd July. The Waterford Crystal Viking Longboat measures 42” in height and 30” in length.

The 9/11 Waterford Crystal Sculpture was created at the Waterford Crystal factory as a memorial to the 343 New York City Fire Department members who lost their lives on 9/11. The main piece, depicts five men carrying FDNY Chaplain Father Mychal Judge from The World Trade Centre site on 9/11, the tall building shell represents all who died in the towers. The base of the piece is comprised of Irish bog oak.

The 9/11 Waterford Crystal sculpture, which took over 200 hours to create, with an estimated value of $75,000 was presented to the Fire Department of New York.

On March 14th 2007, New York Fire Commissioner Nicholas Scoppetta accepted on behalf of the FDNY the Waterford Crystal sculpture, which had been designed to honour Father Mychal Judge and 342 other FDNY members who made the Supreme Sacrifice on September 11, 2001. “The sculpture is a beautiful piece of art, and the sentiment behind it is greatly appreciated”, Fire Commissioner Scoppetta said.

The dedication ceremony was held at the quarters of Engine 1/Ladder 24 in Manhattan, where the sculpture will be housed. Father Judge considered the firehouse his own, and it was from there that he responded to the World Trade Centre on September 11.