Win two trainee places aboard one of the magnificent Tall Ships

Waterford is gearing up to host the start of The Tall Ships Races 2011 and Ireland’s biggest quayside party. To celebrate, The Irish Times has teamed up with Waterford Crystal to offer one lucky reader the chance to win two trainee places aboard one of the magnificent Tall Ships!

The trainee programme is open to those between the ages of 16 and 25, and the winners will leave Waterford on Saturday 2nd July as part of the Race crew for the first leg of the race, sailing around the coast of Ireland and to Greenock in Scotland on board the Eendracht, before being transported home on Monday 11th July.

During your visit, be sure to visit the House of Waterford Crystal to view the specially designed suite of commemorative Tall Ships Race products and join one of the factory tours where you can witness the fascinating production process at Waterford Crystal, watching the glass blowers, cutters, engravers and sculptors at their work. For a chance to win this once in a lifetime experience aboard one of the Tall Ships, enter your details on the link below: Railtours Ireland, in association with Iarnród Éireann, offers visitors to Dublin the chance to see a great portion of Ireland that they would not ordinarily be able to experience comfortably in one or more days. Visitors can sit back and relax as their train glides through the heart  Ireland.

Failte Ireland was approached by the Department of Foreign Affairs to select four or five tourism experiences in Ireland  to be ambassadors for Irish tourism and their own products, at a press reception for media who were in Ireland covering the Queen’s visit.  Media from the globe attended the event including The Guardian, The Boston Globe, BBC News, ITV, France 24 and also media agencies the Press Association and Reuters. The event was an evening of Irish entertainment, music and performance and Irish food that was organised by Failte Ireland. At a State Dinner, held on Thursday May 19th in honour of Her Majesty Queen Elizabeth by President McAleese at Dublin Castle. The Queen shared her delight at the simple sound being made by her Waterford Crystal wine glass as she proposed a toast to the President and the Irish people.

As the Queen offered her toast, President McAleese remarked simply: “Thank you so much” – to which Her Majesty replied: “I like this clinking glass.” The House of Waterford Crystal is a host partner sponsoring Ireland’s largest free summer festival, the Waterford Tall Ships Festival, one of the highlights of 2011. 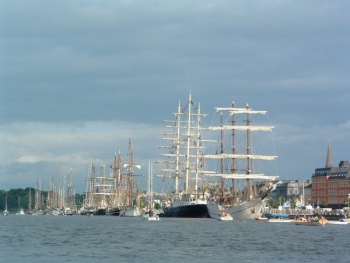 Thursday-Sunday, June 30-July 3, 2011 will be four extraordinary days in Waterford as Ireland once again hosts The Tall Ships Races.

This is one of the most spectacular and colourful events in the world and Waterford is gearing up to host over 70 majestic Tall Ships; 1,500 sail trainees and an anticipated 500,000 maritime, music and festival fans on the quays of Irelands oldest city. Tall Ships Races is set to be the biggest event in Ireland in 2011 and the return of The Tall Ships to Irelands South East region will be celebrated with a festival programme capturing the very best of Irish and international acts; street theatre; fireworks; music and food.

On board The Tall Ships will also be dozens of Irish young people enjoying the once-in-a-lifetime opportunity to participate as trainees, alongside their international peers. This will be an unforgettable occasion and four days of incredible festival fun.

At the end of June 2011, over 70 of the world’s most beautiful Tall Ships will sail up the River Suir and take up residence on Waterford’s famous quayside, before setting sail for the first leg of the famous Tall Ships Races on Sunday, July 3rd.

The hull of Wylde Swan started life as a ‘herring hunter’ in the 1920’s, working off the Shetland Islands – a ship built for speed, ferrying the fresh catch from fishing grounds to the markets ashore. The Jemo, as she was originally called, was originally built by HDW in Kiel.

The ship was decommissioned sometime in the late 20th century and had changed ownership several times before Willem Slighting saw in her underwater ship the makings of a fast sailing ship. Her sleek underwater hull is now part of a rugged sailing ship, reminiscent of the large schooner yachts of the 1900 era.

A Selection of Other ships may be viewed at

The eyes of the golfing world will move to Ireland from 19-25 September in 2011 when the best players on the planet prepare for battle at The 2011 Solheim Cup. Killeen Castle in Dunsany, County Meath, will stage the 12th edition of the biannual, transatlantic team match play competition, which pits the top 12 European players against their rivals from the United States.

Waterford Crystal trophies have long been associated with supreme achievement throughout the world of sport, and especially with the royal ancient game of golf. This seems to me a most appropriate association, in that the skills of the master artisan reflect, in an artistic context, the sublime qualities of the champion golfer - most notably, superb hand-eye coordination, a relentless quest for excellence and the natural extension of individualism via the tools of the trade.  Richly decorated with deeply incised patterns, The Solheim Cup trophy demanded the highest standard of workmanship from masters of three great crafts of glassmaking – blowing, cutting and engraving.

Using a technique originating with the ancient Egyptian civilization, one that has hardly changed since the Middle Ages, the centre panel features a superb intaglio engraving of The Solheim Cup logo, which was designed to incorporate the trophy. And so evolved one of golf's loveliest prizes, born of fire and sand, proudly crafted with loving attention to detail by master artisans, designed to last forever, and now instantly recognizable as the symbol of one of the game's grandest events.

The Cup itself has enjoyed many wonderful moments in its brief lifetime. In addition to being raised high in the air at closing ceremonies by the winning captains of each Solheim Cup event, the Cup has been inspected by airport security personnel prior to trans-Atlantic trips on several occasions. It has flown in the cockpit of the Concorde. In addition, it has been cuddled like a baby in the arms of a hotel general manager who stored it overnight in his safe. The Solheim Cup is quite heavy, weighing more than 20 pounds. Its overall height, including the mahogany base, is 19" inches. The top diameter of the cup is slightly larger than a golf hole - 4" inches - while the base diameter is 8" inches. It is valued at more than $50,000.

A slightly smaller replica of The Solheim Cup has been created by Waterford and permanently resides at the Nicklaus Hall in the Muirfield Village Golf Club clubhouse, Dublin, Ohio. It is in stellar company, displayed along with trophy replicas of the Ryder Cup, the Masters, U.S. Open, PGA Championship, British Open, The Memorial, The Tradition, PGA Senior Championship, USGA Senior Open Championship and the PGA Tournament Players Championship.

The House of Waterford Crystal has celebrated its 100,000th visitor, ten months after it opened in June 2010.

On Friday April 15th, Brenda Mayer from New Fairfield , Connecticut in the United States, had just completed a guided tour of the crystal manufacturing, when she learned that she was the 100,000th visitor. Ms. Mayer was traveling with tour manager John Fitzgibbon, on a Collette Vacations coach tour.

Collette Vacations is a global leader of world travel and Escorted Tours. They are a family-owned business, now in its third generation of Sullivan-family ownership. Collette Vacations daily goal is to deliver to all of their travellers the highest quality, best value and exceptional service, every time, everywhere. They strive to create extraordinary vacation experiences on all 7 continents. The 1848 Tricolour Celebration at the House of Waterford Crystal

The House of Waterford Crystal was delighted to host the 1848 Tri-Colour Celebration. The weekend of the 5th and 6th of March saw the inaugural 1848 Tricolour Celebration take place. The green, white and orange flag which would eventually become the national colour of the Republic of Ireland was first flown by Thomas Francis Meagher at the Wolfe Tone Confederate Club, 33 The Mall, Waterford, on 7th March 1848.

The failed Young Ireland Rebellion of that year would lead to Meagher’s transportation to Tasmania, from where he escaped to the United States, going on to raise the Irish Brigade during the Civil War and serving as its Brigadier-General.

The international dimension to Meagher’s life was recognised at the 2011 Celebration, with representatives of France, the United States and Canada present. The 5th March saw a replica of Meagher’s 1782 Club jacket presented to members of the 69th Regiment who had traveled from New York to attend the event. They reciprocated by presenting a replica of the 69th New York’s first color to Waterford. The evening also saw a political cabaret, where an expert panel discussed the impact of flags and emblems on politics and nationhood.
The main event took place on 6th March when a recital by soprano Donna Roche in Christ Church Cathedral was followed by a flag raising ceremony outside The House of Waterford Crystal. A detachment of the Naval Service Reserve drew up a guard of honour as the Mayor of Waterford Mary Roche addressed the crowd. She was followed by Charles Gautier, the Mayor of Saint Herblain with whom Waterford is twinned, and Canadian Ambassador to Ireland Loyola Hearne (Thomas Francis Meagher’s father had been born in Newfoundland and many Irish settled there in the 19th century). An actor played Meagher for the afternoon and presented the tricolour for the flag raising ceremony, which was followed by the raising of the United States, French and Canadian flags and a rendition of the Irish national anthem. Music during the event was provided by the Barrack Street Band and the Thomas Francis Meagher Fife and Drum Band, and the ceremony concluded with the Waterford Male Voice Choir singing ‘Battle Hymn of the Republic.
The event was a great successand hopefully will continue in future years.
http://www.1848tricolour.com