Waterford’s multi award-winning Greenway celebrates its first birthday On Sunday March 25th with a ‘Birthday Bumps’ drive which aims to encourage as many people as possible to get out, get active and enjoy using the 46km off-road cycling and walking trail.

The ‘You’d never know who you might bump into on the Waterford Greenway’ campaign targets locals and visitors to the area and encourages everyone to grab their bikes or skates, their runners or hiking boots and enjoy the Waterford Greenway as it celebrates its 1st birthday on Sunday, March 25.

Among the many big names to have visited the Greenway over the past year since it was opened by Minister Simon Coveney are sporting legends Paul O’Connell, Sonia O’Sullivan, Sam Bennett, Derek McGrath and Niamh Briggs as well as actress, Carrie Crowley, celebrity chef, Paul Flynn, model and foodie, Roz Purcell and former Taoiseach, Enda Kenny. 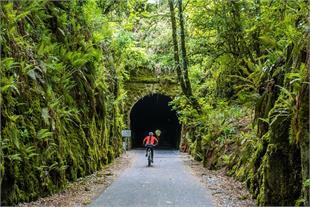 Sunday marks the Greenway’s first birthday and is set to be a family-focused celebration, with costumed characters buzzing about and available for ‘selfies’ at strategic locations between 2 and 5pm. Several local businesses are organising promotions to tie in with the 1st Birthday theme. It’s been a phenomenal start for the Waterford Greenway as it scooped the ‘Grand Prix Award’ and ‘Best Tourism Initiative’ prizes at the All Ireland Community and Council Awards earlier this year. Data released in mid-December showed that close to 250,000 people used the Waterford Greenway in its first 10 months. Michael Walsh, Chief Executive with Waterford City and County Council, said it’s been a phenomenal first year for all.

“The Waterford Greenway has had an incredible economic, social and cultural impact on all the communities which straddle the 46km-long route. It has captured the local and national imagination and has been a huge magnet for visitors to this region. “The challenge ahead now will be to build on this success and encourage those visiting to stay longer and explore more of Viking Waterford while they’re here.

The coastal towns and villages, the communities of the Comeragh Mountains and the Copper Coast, the great houses and gardens of the Blackwater and so many other amazing tourist offerings in and around Waterford city and county all stand to benefit. Working together, we will ensure that the Waterford Greenway lifts all boats,” Mr Walsh vowed. Figures released in early December show that since it opened in March 2017, 247,545 have enjoyed using the Waterford Greenway. Of these, 105,639 were on foot and 141,906 have cycled it. Well over 9 out of 10 (94%) of visitors to the Waterford Greenway www.visitwaterfordgreenway.com rated it as either excellent or good. The Waterford Greenway is Ireland’s longest greenway and the spectacular, 46km off-road cycling and walking trail stretches from the Viking City of Waterford to the picturesque coastal town of Dungarvan.