The World Snooker Masters, sponsored by Dafabet is snooker’s most prestigious invitational event since 1975. It is regarded as one of the Triple Crown events, and is second longest tournament behind the World Championship.

Snooker’s second Triple Crown event began on 15th January and concluded on 22nd and has been staged at the iconic London’s Alexandra Palace in North London since 2012. The top 16 elite snooker players from around the world compete at this major event.

Ronnie O’Sullivan clinched the seventh Masters title by defeating Joe Perry. O’Sullivan fought back from 4-1 down, won seven in a row to go 8-4 ahead, and then held off a late fightback from Joe Perry to win it 10-7. This win means that Ronnie O’Sullivan has surpassed Stephen Hendry’s record of six Masters Titles.

In 2004, the WPBS Association commissioned House of Waterford Crystal to design and manufacture a bespoke trophy for Snooker’s invitational event. The trophy was named after Paul Hunter in 2017. Hunter died from cancer at the age of 27 in 2006 and World Snooker chairman Barry Hearn announced last year that the Masters trophy would be renamed after the three-time winner. O'Sullivan dedicated his record-breaking win to the late Paul Hunter. Hunter was a popular player on the circuit and was praised for his community work and for bringing more focus to the sport - and O'Sullivan was honoured to be the first recipient of the newly named trophy.

The Waterford Crystal team recreated the concept of a ‘nest of 15 snooker balls in a triangle, in an upright position’. The finished trophy measures 12 inch in height and is resting on a 2 inch wooden plinths and weighs 9kg.The piece is sculpted from a solid block of highly polished leaded crystal. The completed trophy captures the beautiful elegance, sparkle and flawless finish, a hallmark of all Waterford Crystal pieces. 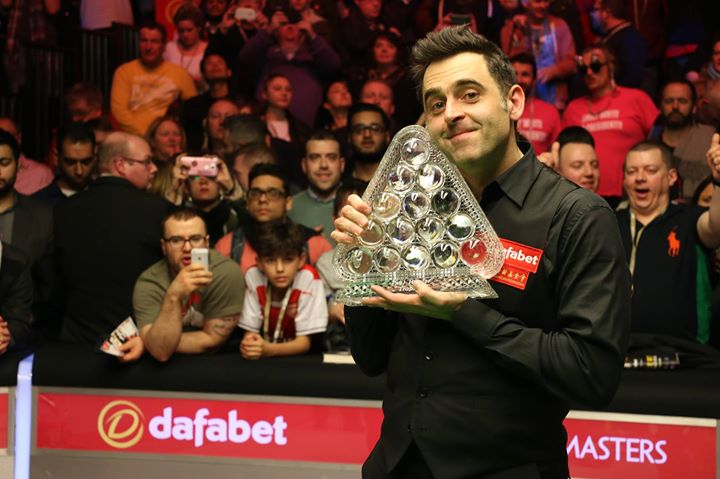