Congratulations to Stuart Bingham who beat Judd Trump 9-8 in a thrilling Coral Welsh Open final. Waterford Crystal, one of the leading world brands in premium crystal,was selected by the WPBSA to produce new trophies for the new World Snooker Home Nations series.

The Home Nations series is new for the 2016/17 season, compromising the English Open, Northern Ireland Open, Scottish Open and Welsh Open tournaments. A new perpetual trophy has been commissioned for each tournament, with each to be named after a snooker legend hailing from that particular country.

This unique piece, the Ray Reardon Trophy was designed by Waterford Crystal designer Billy Briggs, features the Dragon on its front representing the symbol of Wales and also features the logo of the WPBSA. 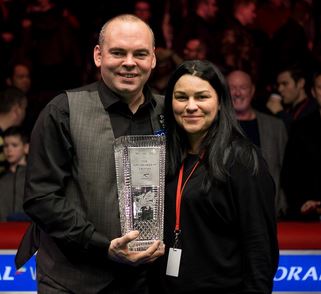