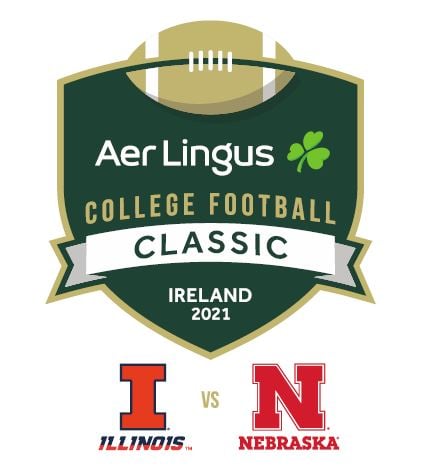 Monday, 14th of October 2019: Today at a press conference in the City of Champaign, Illinois it has been revealed that the University of Illinois will take on the University of Nebraska in the Aviva Stadium for the 2021 Aer Lingus College Football Classic on the 28th of August 2021. This will be the first time that either team has travelled to Ireland as Illinois and Nebraska both welcomed the invitation to move this game to Dublin. The game is sure to be a huge draw to sports fans both in the US and Europe as Nebraska is one of the most successful American College Football teams in history and Illinois has significant links with Ireland.

The University of Illinois Marching Band was the first American marching band to perform in the St. Patrick’s Day Parade and have made trips to Dublin seven times, including their most recent visit in 2018. The Marching Illini are scheduled to return in 2022.

A core objective of the Aer Lingus College Football Classic Series is to foster academic collaboration and relationships as well as business and sporting links, so Illinois were a natural fit. The university already has strong institutional agreements in Ireland with universities and institutions across the country including Cork Institute of Technology, UCD, NUI Galway, UCC and DCU.

The University of Nebraska fans are renowned for taking over stadiums, home and away, with their famous “Sea of Red”, perhaps most notably turning Notre Dame Stadium red in their last encounter with the “Fighting Irish”. With this trip to Ireland, natives can expect to see more red at one time in their country than ever before.

The specially commissioned Waterford trophy is the perpetual prize for the Aer Lingus College Football Classic. The Keough-Naughton trophy bears the names of two powerhouses of Irish America, Don Keough and Martin Naughton. Business leader and philanthropist Don Keough attended college and began his career in Nebraska. Don and was highly regarded by his friend and Nebraska alum, Warren Buffett.

The five-game series, sponsored by Aer Lingus, Ireland’s only 4 Star airline, kicks off with the return of the Navy vs Notre Dame which will take place on Saturday 29th August 2020 and is expected to generate €250 million direct economic windfall for the country over the coming years. Fans are expected to travel in droves to the game similarly to in 2012 when over 35,000 fans travelled from the US to the Aviva Stadium for the Navy V Notre Dame fixture. Limited Hospitality and travel packages are currently available for the Navy vs Notre Dame game, and general tickets will go on sale to the public this coming spring.

Speaking about the announcement, An Taoiseach Leo Varadkar T.D. said: “It’s great to see new teams getting involved in the Aer Lingus College Football Classic. Ten of thousands of fans are expected to make the journey for each game in the series over the next five years, bringing with them a huge boost for the economy. Illinois and Nebraska players and fans can look forward to the best of Irish hospitality. The series will showcase Ireland as a location for international events and tournaments and put our world-leading tourism sector front and centre. The 2020 game between Notre Dame and Navy is fast approaching and now sports fans have another great occasion to plan for in 2021.”

Lord Mayor of Dublin, Paul Mc Auliffe who travelled to Illinois as part of the official Irish party said: “It is a privilege to be here at the University of Illinois for the announcement of the teams for the 2021 Aer Lingus College Football Classic. I welcome the news that both the University of Illinois and University of Nebraska teams and fans will travel to Dublin in 2021 and I look forward to seeing the colour and energy that they will bring to the city of Dublin. Dublin and Ireland are ready to welcome you! This fixture is an important date in our calendar and showcases Dublin as a destination for hosting major international sporting events.”

Speaking at the announcement, Padraic O’Kane from Irish American Events Ltd. said: “This is a milestone moment for the combined Irish American Events team, we set ourselves the ambitious goal back in 2015 when we formed the joint venture company, to establish Ireland as the European headquarters of College Football. Today we announce our first back to back fixture with the news that the Fighting Illini and the Huskers from the Big Ten conference will play Dublin in 2021. “On or around St. Patrick’s Day 2020 we plan to announce the 2022 fixture which will make it three games of the five game series confirmed in a row, not to mention the amazing and exciting recent news that ESPN College GameDay is coming to Dublin next summer as part of the 2020 Classic, our ambitious goal is now a reality!

“We are honoured to promote and operate such profile annual events under the umbrella of Much More than a Game, as part of the Aer Lingus College Football Series. It’s a real team Ireland Inc. public / private partnership win – a special note of thanks’ much go to Aer Lingus, Failte Ireland, Tourism Ireland and Dublin City Council for believing in our vision”

Illinois Director of Athletics Josh Whitman commented: “The University of Illinois, our football program, our alumni and fans, and the entire Fighting Illini family are in for a once-in-a-lifetime experience on the Emerald Isle. When first approached about this game, almost two years ago, we had an immediate interest. This game will provide an incredible educational opportunity for our football student-athletes who, because of their schedule, generally do not receive the same international experiences as many of our other student-athletes. For our fans, I hope they will journey with us across the Atlantic for a wonderful trip and a major football game, all set against the beauty of Ireland.”

Nebraska Athletic Director Bill Moos commented: “Playing a game in Ireland provides another way to spread the Nebraska brand, and in this case on an international stage,” Moos said. “We are always looking for new scheduling opportunities, and when this was presented, Coach Frost and I decided this would be an experience of a lifetime for the student-athletes in our program. This will also be a great trip for our fans, and knowing how Husker fans travel, it will be great to see Dublin, Ireland turned Red.”

Commenting on the announcement, Aer Lingus CEO Seán Doyle said: “With the excitement building ahead of the return of Navy and Notre Dame next August for the Aer Lingus College Football Classic 2020, it is great to see such enthusiasm from other teams to cross the North Atlantic to play in Ireland in 2021. As title sponsor of the five-game series we have no doubt that this exciting event will strengthen the important ties, both in sports and in tourism, between Ireland and the US.

“Aer Lingus, Ireland’s only 4-star airline, is undergoing its largest ever transatlantic expansion, building towards our aim of becoming the leading value carrier across the North Atlantic. We now fly to 14 North American destinations direct from Ireland. The Aer Lingus College Football Classic provides us with a unique opportunity to promote ourselves to this key strategic US audience.” The Aer Lingus College Football Series will have a very strong Irish-American influence. Not only will there be the usual college football fanfare with lots of fun events including marching bands, cheerleaders and tailgating parties, but there will also be a great celebration of the close Irish-American links that are so highly valued. The teams will compete each year for the Keough-Naughton College Football perpetual Trophy, acknowledging the contribution to Irish-American society of Don Keough and Martin Naughton.

ESPN College GameDay Built by The Home Depot is bringing its iconic pregame show to Dublin on Saturday, 29th August 2020, kicking off a new college football season and marking the first time in history the travelling road-show will originate from outside the United States. The 11-time Emmy Award-winning pregame show, in cooperation with Aer Lingus and Tourism Ireland, will set the scene for the Aer Lingus College Football Classic between Notre Dame and Navy at the Aviva Stadium.

Hospitality packages for both the 2020 and 2021 games are on sale now through the official corporate hospitality game partner Corporate.ie.

General ticketing information to be released in due course, with a pre-sale sign-up option available on the official site