The Origin of Irish Coffee

Foynes in County Limerick is closely connected to the origin of the Irish coffee, as with anything in Ireland, the Irish weather played a big role as well. In 1943, a coffee shop and restaurant was opened by Brendan O'Regan in the terminal building at Foynes.

Within a short period of time it became one of the best restaurants in Ireland. O'Regan recruited chef Joe Sheridan to run his kitchen. In the Winter of 1943, late one night, a flight left Foynes, destined for New York. However due to the bad weather conditions the pilot made the decision to turn back and wait until the weather improved. The control tower at Foynes received a Morse code message advising that they were returning and would require the staff to return to the restaurant to have food and drink ready for the passengers, as they had been flying for several hours.

Chef Joe was asked to prepare something to help warm the weary passengers and he was inspired to put some Irish whiskey in their cup of coffee. One of the passengers thanked Joe for the wonderful coffee, asking him if it was Brazilian coffee that he used. Joe jokingly answered, “No, it was Irish coffee!”

A few weeks passed and Chef Sheridan knocked on O’ Regan’s office door. He showed O’Regan his new drink in a stemmed glass and asked him, “How about that for eye appeal?” O’Regan replied, “Genius, Chef!”

And so Irish coffee was born. 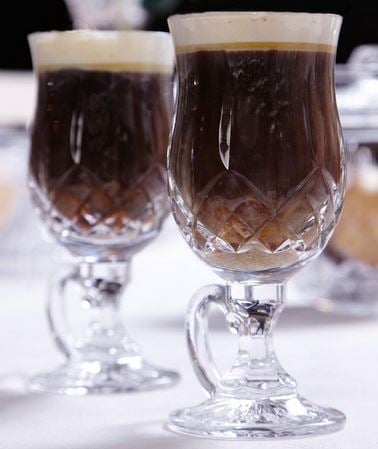