Michael started his career with Waterford Crystal in 1974. At the age of 15 years, he heard from a friend (who was already employed by Waterford Glass) that the factory was recruiting apprentices. Michael clearly remembers the speed of the hiring process, he was interviewed by the then HR Manager Sean Dunphy on Wednesday, did a medical on Friday and was told he was starting in Waterford Glass on Monday!! Michael lived in Ballyhale, Co Kilkenny with his parents and eight siblings. Michael’s Dad worked all his life in Forestry and Roads with the Council and was very proud to have his son training with the world-renowned Waterford Glass.

Michael remembers starting on the first day in the Kilbarry factory, along with a few other new starters. “I had to choose whether I wanted to work in the hot end of the process or the cold end. I chose the cold end of the process and was introduced to George Lye and Frank Leahy in the cutting department. I went on to train as a Rheintour Cutter under their guidance. I trained for five years as an apprentice and then completed a further three years to become a Master Cutter.” Michael worked in the cutting area for twenty-one years in total.

In 1995 a job was advertised internally for two sculptors in the K4 Design department. Michael applied along with twenty other candidates. Each of the candidates had to create a sculpted piece and their work was graded and judged. Michael was successful and was selected for one of the positions as a Sculptor. With further years of training Michael went on to become a Master Sculptor.

Michael has worked on many, amazing prestigious pieces during his career at Waterford. When asked what his favourite pieces were, he says, “I don’t have favourite pieces but have lots of memorable pieces. The first piece that came to mind was the ‘Alotion Club House’, this was a privately commissioned piece for a gentleman from Arkansas. He commissioned Waterford Glass to create an exact replica of the Club House he was building”. This piece took over four months to complete and Michael has vivid memories of creating the balustrades that lined the front of the piece, tedious and time consuming, but necessary to create the stunning finished effect. The piece was displayed in the club house on completion.

A spectacular six-foot-high Waterford Crystal Christmas tree, designed by Diarmuid Gavin was another memorable piece Michael created. The tree was auctioned in the UK raising £35,000 for a children’s charity. Michael got to meet Princess Anne who was patron of the charity.

Michael remembers well his trips to Venice to the Fincanteri ship yard in Trieste. He travelled with the team from Waterford to install a spectacular piece that were commissioned by the Holland & America Line for four of their cruise liners. Starting in 2002 with the final installation in 2007, the ships were the Zuiderdam where they installed a ‘Crystal Seahorse’, the Oosterdam had a ‘Crystal Globe’, the Westerdam a ‘Crystal HAL Ship’ and finally the Noordam where they installed a ‘Crystal Compass’, these breath taking sculpted piece were installed in the atrium of each ship. The installations took a week or so to complete, over the period of five years.

Michael has ‘rubbed’ shoulders with lots of stars from the music world when Waterford Crystal were commissioned to make five crystal Joshua Trees for the band U2 and their then manager Paul Mc Guinness. The sculpted trees were presented to the group to mark the occasion of being given the Freedom of Dublin City in 2000.

During Michael’s career at Waterford he has met numerous people, he has conversed with politicians from all walks of life, who have visited Waterford Crystal, Enda Kenny John Hume, Gerry Adams, Pat Doherty and David Trimble to name but a few. Meeting Alex Ferguson (Manchester United Manager) is another stand out moment for Michael, Alex had commissioned a sculpted crystal replica of the Old Trafford stadium which he gifted to the Club. Even though Michael is more of a GAA man and staunch Kilkenny fan he thoroughly enjoyed meeting with Alex on his visit to Waterford.

Michael is very passionate about his work and loves to chat to visitors about his craft and the pieces he has worked on. He loved meeting and chatting with Eugene lambert (Irish puppeteer) and his wife Mai, he found them both to be very interesting people. Michael also met with Millvina Dean (one of the last people to be rescued from the Titanic as a two-month-old baby) Milvina visited Waterford Crystal with her son and Michael had the opportunity to chat with her and hear a little of her fascinating story.

Michael Murphy Master Sculptor has created hundreds of pieces, during his 44 years at Waterford Crystal. He has met with royalty, chatted with celebrities, met politicians and people who have led amazingly interesting lives. As Michael reflects on his career the message he would send to himself the 15-year boy who stated work in Waterford Glass back in 1974 would be to work hard, treat people with respect, have pride in all you do and enjoy your journey!!! 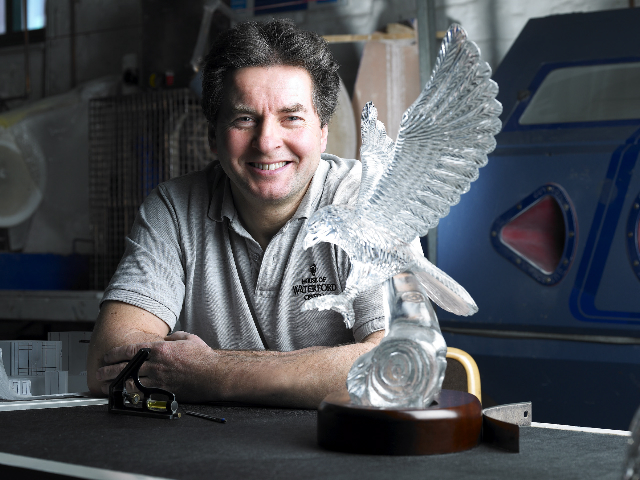 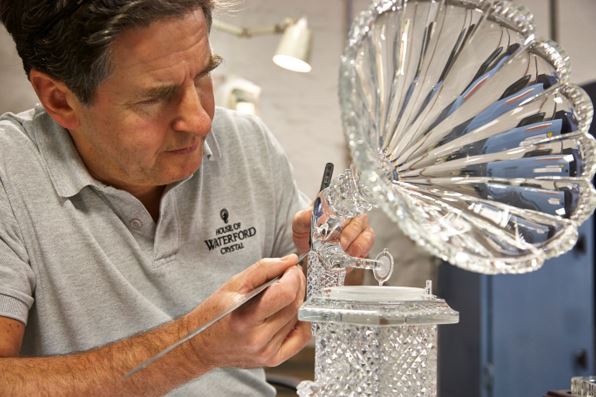