Pierce McGrath started his career with Waterford Crystal over 51 years ago. He joined the company at the young age of 16 years.

Pierce remembers it well he says, “A very easy date to remember 9/9/1969 was when it all began and in a blink of an eye here we are all these years later”.  Pierce was born and reared in Tinhalla, Co. Waterford, where he lived with his mother, father, and older brother. A cousin of his Mam’s, John Quann (a man Pierce had great respect for) was a wedge cutter at Waterford Crystal.  John knew that the company was looking to recruit apprentices and he thought Pierce would be a good fit for the job. Pierce remembers well the interview with Tom Healy (HR), a daunting experience for a quiet country boy, but he impressed Tom and was told to report for work and meet with Mr. Carelli on his first day.

Pierce reported for duty but could not remember the name of the man he was to report to, being very shy and retiring he didn’t ask either.  Pierce laughs as he recalls “I didn’t get to meet Carelli for a further 3 weeks!!”  On meeting Carelli he didn’t make any references to the missing weeks and neither did Pierce!  Carelli who had come to Waterford from Italy went on to train Pierce as an apprentice flat cutter on his bench. To train as a flat cutter at Waterford you must serve 5 years as an apprentice and then a further three years to master the craft. At the end of each year the apprentice must complete an exam piece. Throughout the years Pierce trained with lots of masters and fondly remembers Jim Purcell and Jimmy Cusack as great mentors. He adds that Dixie Baily was a ‘Top Notch’ gentleman.

Pierce forged friendships with these men and learned the tricks of the trade from them all. He points out that the 13 men on each bench were paid by piece so it was in their interest to train you well. This came with the pressure of knowing if you messed up or slowed the team down, this would be reflected in the weekly wage and you certainly didn’t want to be blamed for a poor wage!!

Pierce invested in a motorbike which held a great fascination for the young Pierce. As he was now working he was able to purchase one and pay it off from his weekly wage.  Pierce would ride in and out, 20 miles each way between the factory and his home.  In the third year of training at Waterford, on one of those long cold and wet journeys home, Pierce decided to apply to the Garda Síochána. He took the exam in the Olympia in Waterford, and was called for an interview in Portlaw Garda Station, and he was then called to Dublin for a medical and an Oral Irish exam. Pierce says, “I was nervous enough about taking the Irish exam, that went without a hitch. The doctor at the medical commented that it was a pity I didn’t get a haircut before I came up. I laughed because I did get a haircut but it wasn’t a crew cut befitting a garda, it was now shoulder length!!”. Well, the shoulder-length hair didn’t hinder Pierces' chances and he was successful in his application and was given a date to start in Templemore at the Garda Training Centre.

To be selected to train as a Garda was quite the honor, to pass the rigorous vetting and testing was no small achievement.  Pierce says it was a very tough choice between remaining at Waterford, working with a world-renowned brand doing a job which he loved surrounded by a group of comrades he respected, or making the decision to train as a garda. “My parents, even though they were very proud that I was successfully selected, were also very worried about me joining the force as there was trouble in the north and the Garda were manning the border. They thought it was just too risky”.  So, Pierce decided to continue his training and went on to qualify as a flat cutter. “I often think about what path my life would have taken if I had chosen to train as a Garda, but I don’t have regrets. I got to remain in Tinhalla, a very beautiful place.  I went on to spend 51 years at Waterford, so I reckon I made the right decision. I still commute to Waterford daily, but nowadays I have the luxury of a car. Motorbikes are still a great passion of mine,” he says.

Over the years Pierce has worked in the Butlerstown plant, where he specialised in Chandeliers and lighting. He also worked in Kilbarry, flat cutting pieces right up until 2003 when he moved into the Flat Mill where he worked on special pieces, trophies, and bespoke pieces. Pierce had the opportunity to go to Boston on an artisan event in 1995, where he signed and personalized pieces for customers. He enjoyed the experience of meeting the customers and this event brought home to him how much Waterford Crystal meant to these people. The international appeal of the pieces he and his colleagues had created here in Waterford, truly amazed him.  Pierce said, “I felt very proud to represent the brand and my colleagues on this international platform.”

Pierce worked in the flat mill, right up until the plant closed in 2009.  “When the plant closed in Kilbarry, I was in my 50’s and I thought that’s it, I will never cut crystal again. I felt it was too late to retrain and find something I enjoyed as much as cutting crystal - I had spent nearly 40 years crafting and creating pieces. 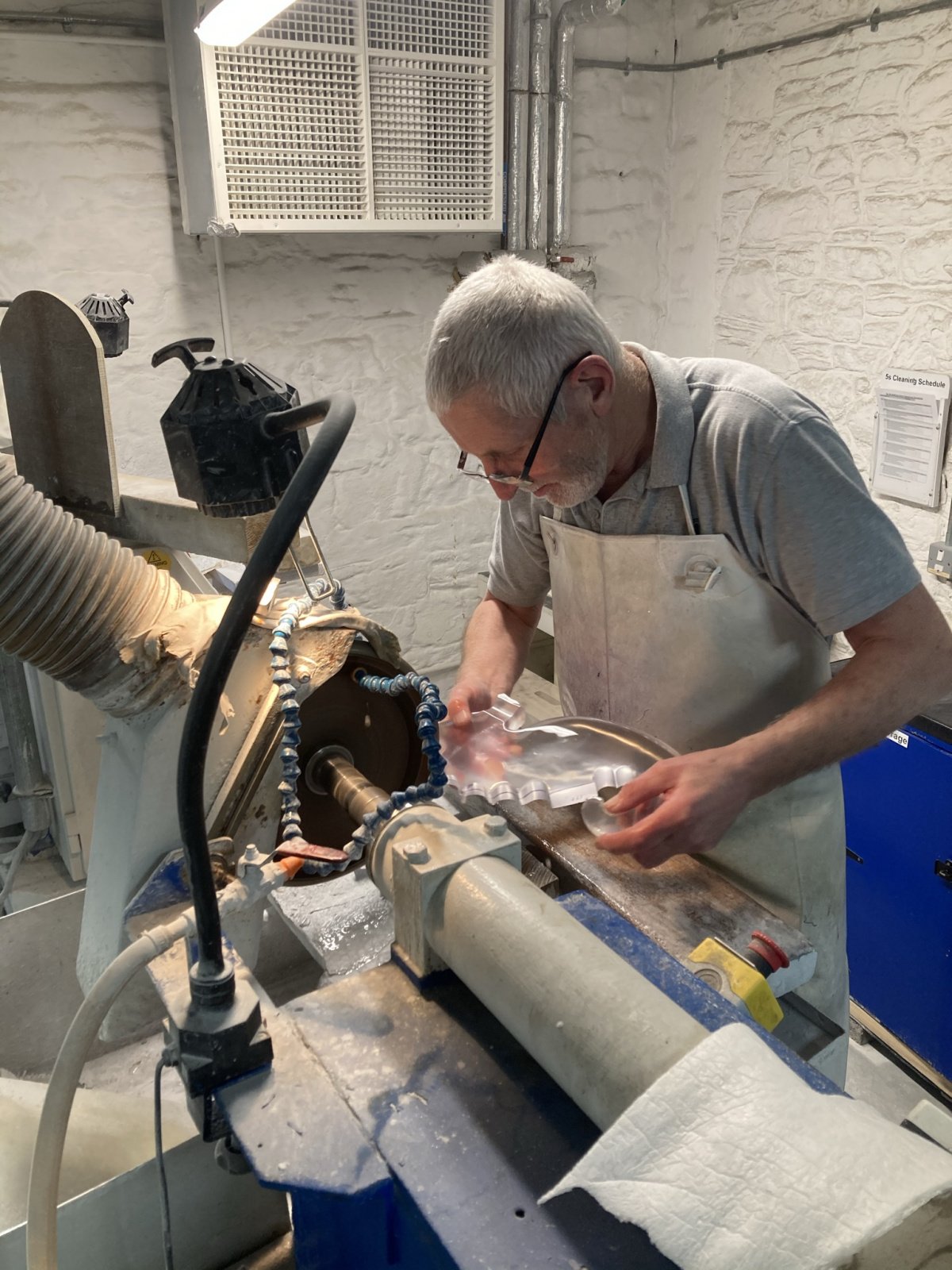 In 2010, when news broke that Waterford Crystal was reopening, Pierce was thrilled to be selected by Dermot Barlow and Tony Grant to return to doing what he knew best, cutting crystal.  Pierce says “It just felt like coming home when we started back here on the Mall in Waterford, everything was so familiar, the sounds and the smells of the crystal being created. When you have spent so long involved in a craft like this its ingrained in your very fiber”.

Pierce is not a man to sit on his laurels and in 2013 he was given the opportunity to move into the sculpting area at the House of Waterford Crystal. This move gave him the chance to work with the Sculpting team creating bespoke and one-off pieces and of course the amazing Trophies that are created here.  Pierce is a huge fan of golfing so it’s no surprise to hear that his favorite trophy he to have worked on was the Phoenix Golf Trophy and most recently the 3M Golf Trophy. Pierce says,” I get great satisfaction watching the tournament being played and then seeing the winner receive the trophy that I have played a part in creating, a truly unique experience”.  One of the most memorable, one-off pieces that Pierce created was a stunning motorbike sculpted from several blocks of crystal. “It was a privilege to create that piece, working on something you are very passionate about brings something very special to the finished piece,” Pierce fondly recalls.

Pierce is a true craftsman, hardworking with great pride in his work. Pierce says these traits came from his parents. His father worked all of his life in the local tannery and his mother came from a long line of blacksmiths. You could say hard work and craftsmanship were embedded from a young age.  When Pierce reflects on his 51 years at Waterford, he says, “Over the years, I have enjoyed meeting people from all corners of the world as they pass through our factory, people who have a passion for the pieces we create here. It’s always lovely to chat with them about what I’m working on.  I have learned so much from all of the great men I have worked with over the years and I have made lifelong friends during my time at Waterford. When I started work as a 16-year-old boy I was the only one ever from Tinhalla to work at Waterford Crystal and I still hold that record!”