On a warm Summer evening of 1964, 15-year-old Pat Boyce cycling home from De La Salle College decided to drop into the Waterford Glass Factory. Pat heard Waterford Glass were looking for apprentices and he thought it would be a nice summer job… a summer job that was to last 55 years! Pat took a test in the cutting shop and after he passed, he was offered a position at Waterford. His parents were not impressed with Pat choosing to leave school to work in the factory. Pat's father was an engineer in the local Jute factory and Pat remembers “My father had high aspirations for me as his eldest son to follow in his footsteps and to study to be an engineer. It took him a long time to come around to the idea that I was choosing to work in a factory. He advised me it was only a small company and he wasn’t convinced it was going to last!”

Pat started in the cutting department as an apprentice, at that time you trained on a six-man bench; usually two apprentices to four Master Cutters worked on the bench. Pat remembers with great fondness these years working with his mentor, Heinz Platner who was the manager of this area. Pat remembers that life as an apprentice was hard work with so much to learn. At the end of each of the first five years, there was an exam piece, a bowl to be cut. Each year the bowl increased in difficulty, each bowl more intricate than the previous one, finishing with the 5-year Apprentice Bowl. Pat passed his yearly exams with ease and was thrilled to bring home his final exam piece engraved with his name and the date he completed his exam and became a Master Cutter. Pat went on to become a Bench Master himself and stayed in this role for several years. While working in the cutting department, Pat was known to cut a particular bowl in record time. This bowl went on to be fondly known by the craftsmen as the ‘Boycey Bowl’. The memory of this brings a big smile to Pat’s face, “Just one of those things they said!” he fondly remembers.

Pat went on to graduate into the Specials Department, it was in this department that the bespoke pieces and trophies were created. It was an exclusive and very interesting place to work. “I really feel privileged to have watched Charles Bacik and Miroslav Havel at work, designing and creating these unique pieces that were in demand worldwide, at the time. I didn’t really realize at the time, what a huge part these men played in the history of Waterford Crystal,” says Pat. Pat went on to travel the world extensively, demonstrating the craft of cutting and engraving product at events. He visited stores in the UK, including; Harrods, Selfridges, House of Fraser and John Lewis, Dillard’s in the USA and many more. One of the standout memories of these visits for Pat was when he visited the USA Military base in Lakenheath, UK and bases in Naples and Sicily. Pat loved meeting with the army personnel and their families, enjoying personalizing their crystal purchases. Pat worked on the Superbowl trophy as a young cutter, it was a huge privilege to be chosen to cut this world-renown trophy. 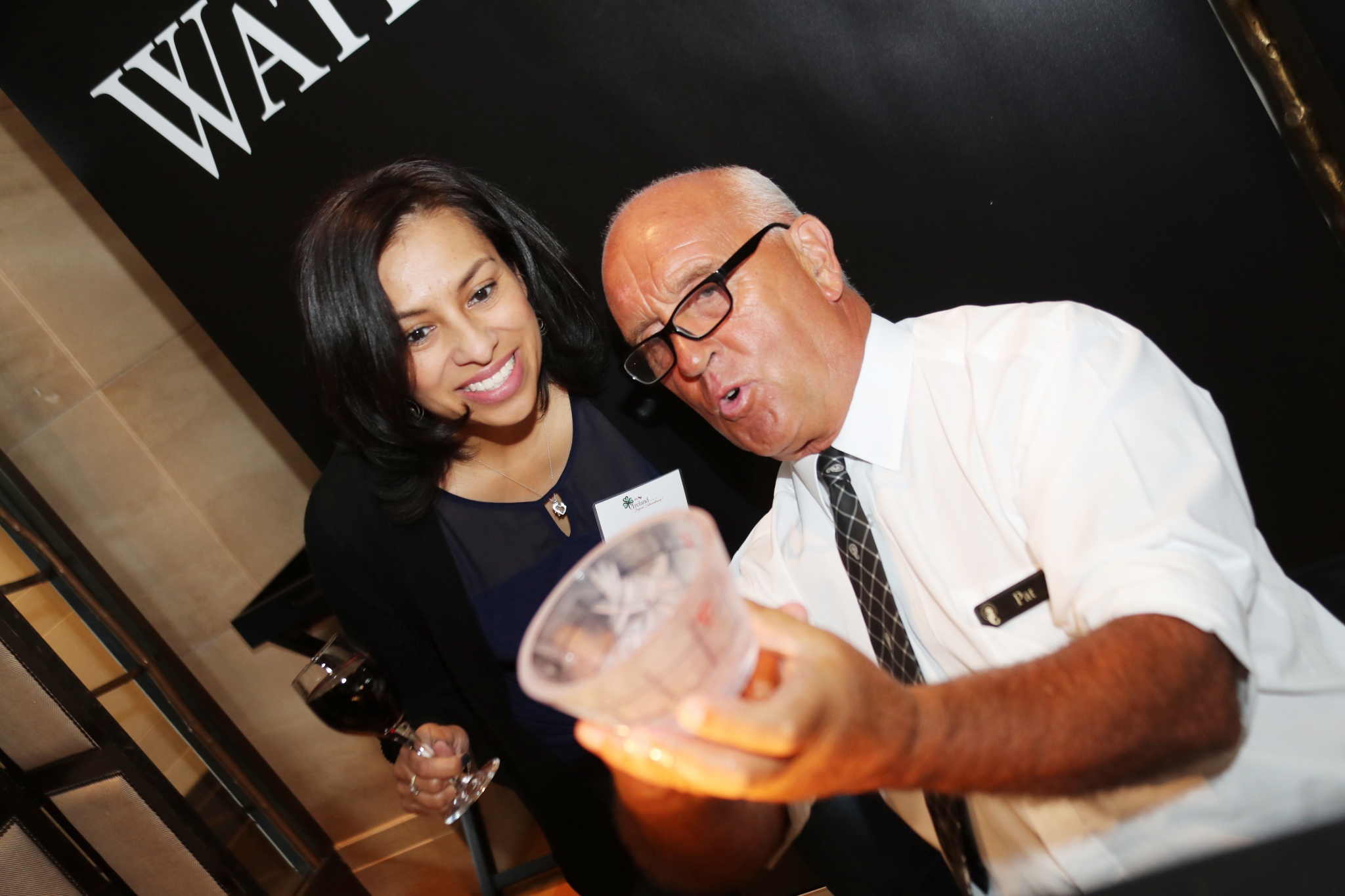 Pat has met many of the rich and famous during his career at Waterford, it was a struggle to find his favourite. While working in the specials department in Kilbarry, Jimmy Carter (former American President) was visiting the plant. Pat met with Carter and requested a photograph with him and his son David, who had recently joined the company as a cutter. So, father and son joined Jimmy for a memorable photograph. While working in Harrods in London Pat had the pleasure of meeting Michael Caine (Actor) and Jose Mourinho (Football coach and former player) both men are people he admires. “I have met amazing people during my travels for Waterford Crystal, people I have admired and looked up to in my life, I consider myself very lucky to be able to do this as part of my working day”, says Pat.

Pat went on to became one of the first craftsmen to join a part of the tourist trail in Kilbarry known by the craftsmen as ‘The Hen House’. This was an area where the visitors would go, when they had completed a visit through the factory, to meet with Master Craftsmen. It gave the visitor the unique opportunity to see the Master Craftsmen up-close, using the skills that had taken them years to master. Visitors could chat to the craftsmen about the pieces they were working on and the skills involved in creating each piece. Pat stayed in this area, alternating between the tourist trail and the specials department for many years. Pat decided to go for a position that became available in the Gallery in Kilbarry, the position combined retail sales and engraving pieces for the visitors to personalize their products. Pat remained in this position until the closure in 2009. “Shocked and devasted, the only words to describe how I felt when the plant closed, I had known nothing else but Waterford Crystal since I was 15 years old,” a very emotional Pat remembers. 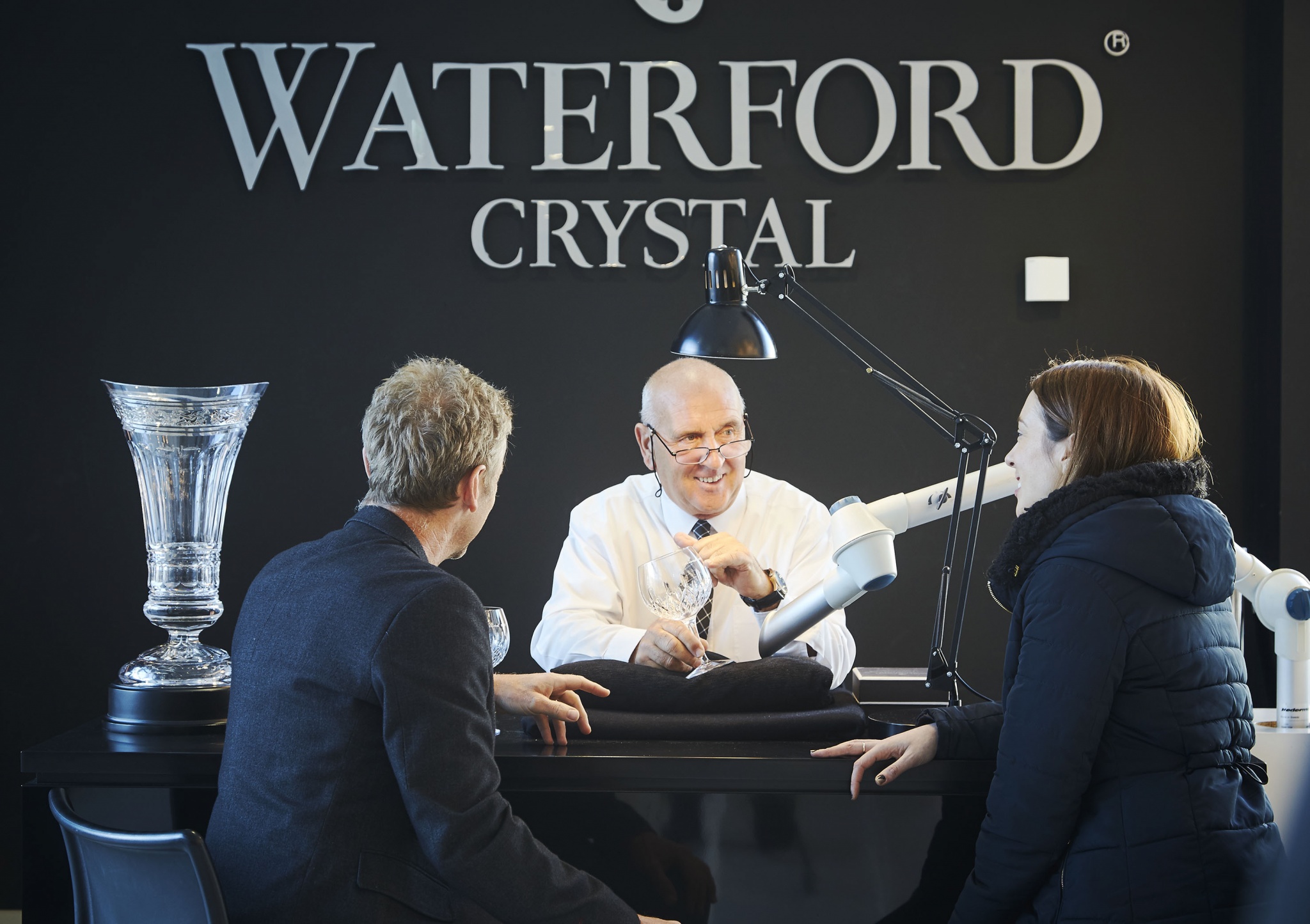 The story does not end there, Pat was recruited in 2010 when the House of Waterford Crystal reopened on the Mall, in the heart of Waterford City. Pat resumed the role of retail sales associate and engraver in our spectacular showroom. Pat’s son David who followed in his dad’s footsteps, training as a cutter and engraver is also working at the House of Waterford Crystal, so lots of words of wisdom and advise are passed on over tea break! At the end of November 2019 Pat will hang up his engraving buzzer for the last time and retire to spend time with his wife Sheila and family to pursue a life of foreign travel and fun. 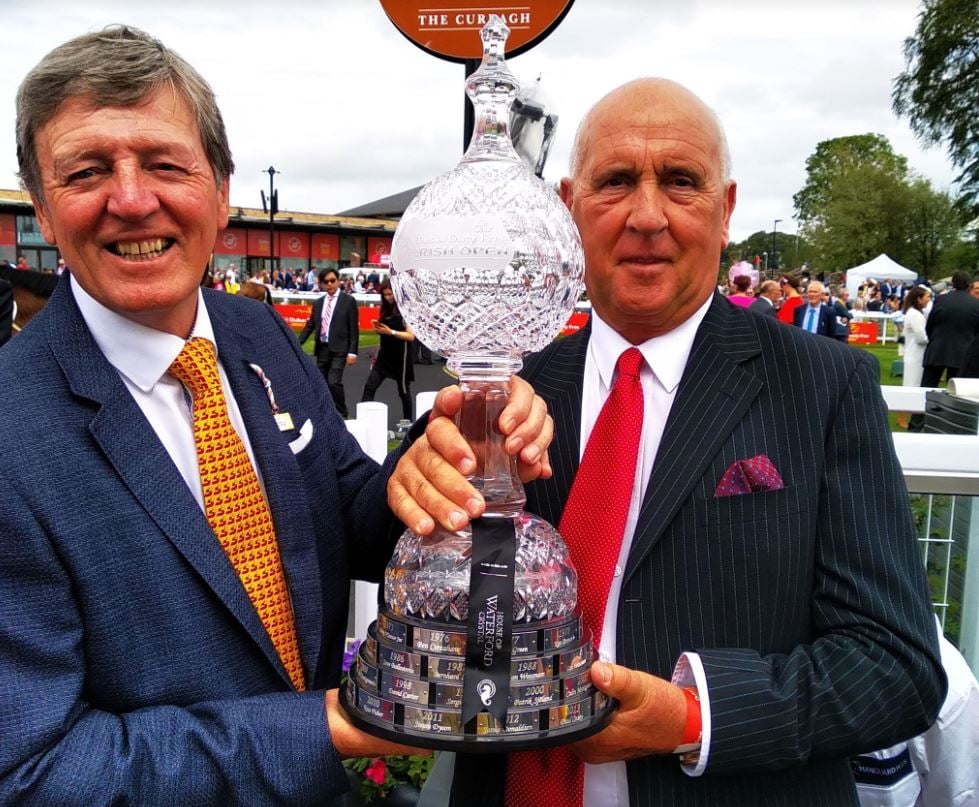 “From time to time I pick up my apprentice bowl and look at the date 1972 and think where all the years went. It seems like a lifetime ago and yet it passed in a blink of an eye, when I look back on all those years working at Waterford Crystal, it afforded my family and I a great livelihood and a great life. I have made so many friends along the way, it has been my pleasure to have personalized so many pieces of Waterford for so many visitors. I have engraved thousands of pieces during my time in the Gallery in Kilbarry and here at the House of Waterford Crystal. Some of these inscriptions were unusual, some wonderful and are in homes all around the world. I have attended amazing events in spectacular locations, meeting wonderful people along my journey. All in all, its been a fantastic 55 years, thanks for the memories”.

On behalf of all of Pat’s work colleagues we wish him many years of health and happiness after 55 years at Waterford.