Martin was born in Waterford City, his parents both from Waterford moved to Drogheda, when Martin was three months old, Martins Dad worked for a company in Waterford that relocated to Drogheda. It was in Drogheda that Martin completed his education. At the age of 19 years Martin made his way from Drogheda to Waterford, his uncle Tom Flynn who worked in Waterford Crystal recommended that Martin apply to work in the factory and in 1973 Martin started working in Waterford Glass. “It was difficult leaving my family in Drogheda at that young age” says Martin, but his parents encouraged him to move to Waterford, they knew the great reputation the company had and felt it would be a great opportunity for him. Martin moved in with his grandparents and even though Waterford was not home it was very familiar to him having spent many holidays here with his family.

Martin started work in the cutting department, his memory of his first day was seeing row upon row of cutters at work, cutting in to crystal pieces, quiet a daunting experience!! The training for a cutter back in 1973 involved attending the on-site apprentice school, where you were set tasks to test your ability, this training in the apprentice school lasted a couple of months, the apprentices then got experience on the cutting benches under the watchful eye of the bench master. This training enhanced the skills of the apprentices, gaining lots of experience under the various bench masters. Martin was assigned to one bench master to complete his 5 years training; the apprentice bowl was the test piece for the cutters and Martin successfully graduated from his 5 year apprenticeship to become a craftsman. Martin then completed a further 3 years training before he became a Master Cutter. Having spent almost 19 years in the cutting department in 1992 the opportunity arose internally to train as an engraver, Martin had a keen interest in sketching and drawing all his life and had originally wanted to work in the engraving area, so when the opportunity arose he applied for the position and was successful. The skillset required for engraving is completely different to the skillset required for a cutter, this career change required Martin to retrain to use under wheel rather than the over wheel that is used in cutting. To become a Master Engraver a full 8 years training was required, Martin completed this and graduated as a Master Engraver.

Over the years Martin has engraved many of our very prestigious pieces, he has worked on the Pebble Beach golf trophy, ATP World Tennis Players championship, motor racing, and entertainment awards to name but a few. When Martin was asked to name his favourite piece or pieces, he said “I have no favourite piece, I give the same level of dedication to detail on each and every piece I work on”, the words of a true craftsman. In 2002 Martin had the opportunity to visit Shanghai China, for the ATT world tennis finals where he was to engrave the winners name onto the spectacular Waterford Crystal trophy. At this event Martin met Lleyton Hewitt who was ranked Mo 1 tennis player in the world at that time. Martin felt honoured to engrave Lleyton’s name on to this spectacular trophy. A few years later Martin got to meet Roger Federer at the same tournament but this time it was held in Houston Texas U.S.A. Meeting both of these world class athletes at these prestigious sporting events, are stand out memories for Martin.

The four seasons bowl is a beautiful piece that Martin designed and engraved, a piece he can be very proud of. On the bowl you can see he has used a mixture of all three types of engraving, sandblasting, buzzer and Intaglio engraving, Martin’s inspiration for this piece comes from his love of nature the flora and fauna of the Irish countryside and his fondness for the differing seasons. On the bowl you can see Martin’s beautiful interpretation of each season. This stunning piece has been much admired and sought after over the years by our visitors, some will ask for subtle changes to the piece, in order to personalize the piece for themselves, be it engraving the name of a first-born grandchild in the appropriate season, or newly-weds having their names engraved in the season they wed, along with many other requests, Martin will always happily oblige. Some of our visitors have likened the engraving on the bowl to the cycle of life, Spring/Birth, Summer /Youth, Autumn/Maturity and Winter old age. The four seasons bowl has proven to be a very popular piece with our customers. Martin worked in the Kilbarry plant the Dungarvan plant, and here on the Mall in the House of Waterford Crystal.

During 46 years at Waterford Martin feels very fortunate to have worked with so many talented craftsmen, he is very happy with the decision his 19 year old self made to return to his native county and join the workforce of Waterford Crystal. He has enjoyed his career with Waterford, he thoroughly enjoys meeting the interesting people he has spoken with on tours and loved the opportunities he has had to visit abroad representing Waterford Crystal. 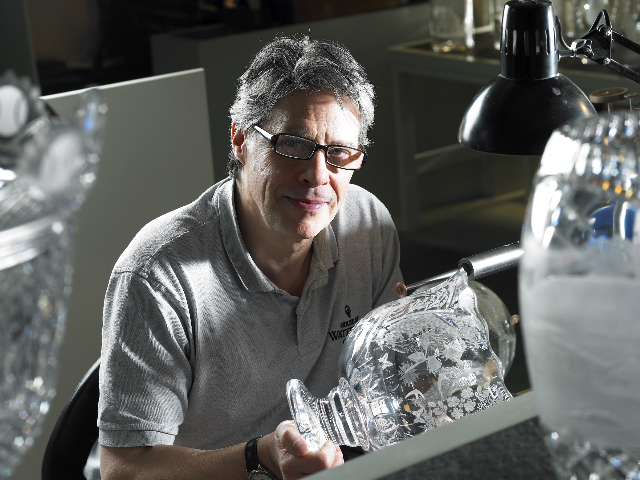