John Keane is our Master Mould Maker at the House of Waterford Crystal. Waterford Crystal is one of the few companies today, which still practises the ancient craft of mould making. Very little has changed in this craft over the centuries. Wooden moulds and hand tools are used by our Master Blowers to shape the molten crystal.

"I have worked with Waterford Crystal for 46 years", says John. "As a young boy of 14 years I was encouraged by my teacher to join Waterford Glass. I am  a native of Dungarvan in county Waterford had never even visited Waterford city until the first day I started work in Waterford Glass back in 1972!"

John is our only craftsman on site who has worked in all of the 5 different production sites, Johnstown, Kilbarry, Dungarvan, Butlerstown and here at the House of Waterford Crystal.

During his 46 years with Waterford,  John has crafted hundreds of wooden moulds that are used to create our spectacular trophies and one-off bespoke pieces. The wooden moulds and hand tools are made from beech and pear wood and are a smooth wood, which has a high tolerance to heat. Even so, due to the searing heat of the crystal these moulds have a relatively short life span of approximately 7-10 days.

The wood is turned on the lathe as John creates the shape of the piece within the solid block of wood.

"Out of all of the moulds that I have created,  my  favourite has to be a piece commissioned by the New York Yankees for one of their players Mariano Rivera, it was a New York fireman’s helmet" says John.

This piece could not be turned on the lathe so John handcrafted this mould using a chisel and hammer, the mould took two weeks to complete. 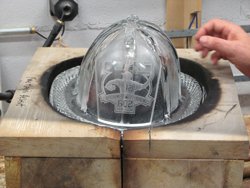 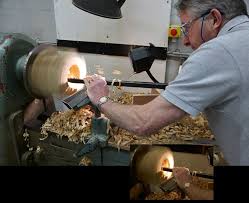