John Drohan always knew he would spend his life working with his hands, his father was a talented well renowned carpenter, who instilled great values in his family,. He always told them “All great craftsmen, have pride in what they do”. This resonated with young John and is something he has aspired to all his working life. John was born and raised in Dunhill in county Waterford and resides there to this day. He spent a lot of time in his youth accompanying his father as he worked, it gave John a great appreciation for fine craftsmanship. Johns eldest brother went on to follow in his father’s footsteps. In 1970’s Ireland trades were the way to go for many young men. John left Dunhill National School and travelled to the local technical school in Waterford City. A representative from Waterford Glass factory visited the technical school back in 1970, the boys were invited to apply for positions in the factory. John went to the Johnstown factory, where he successfully completed a cutting test and started working in the Kilbarry plant in June 1970. 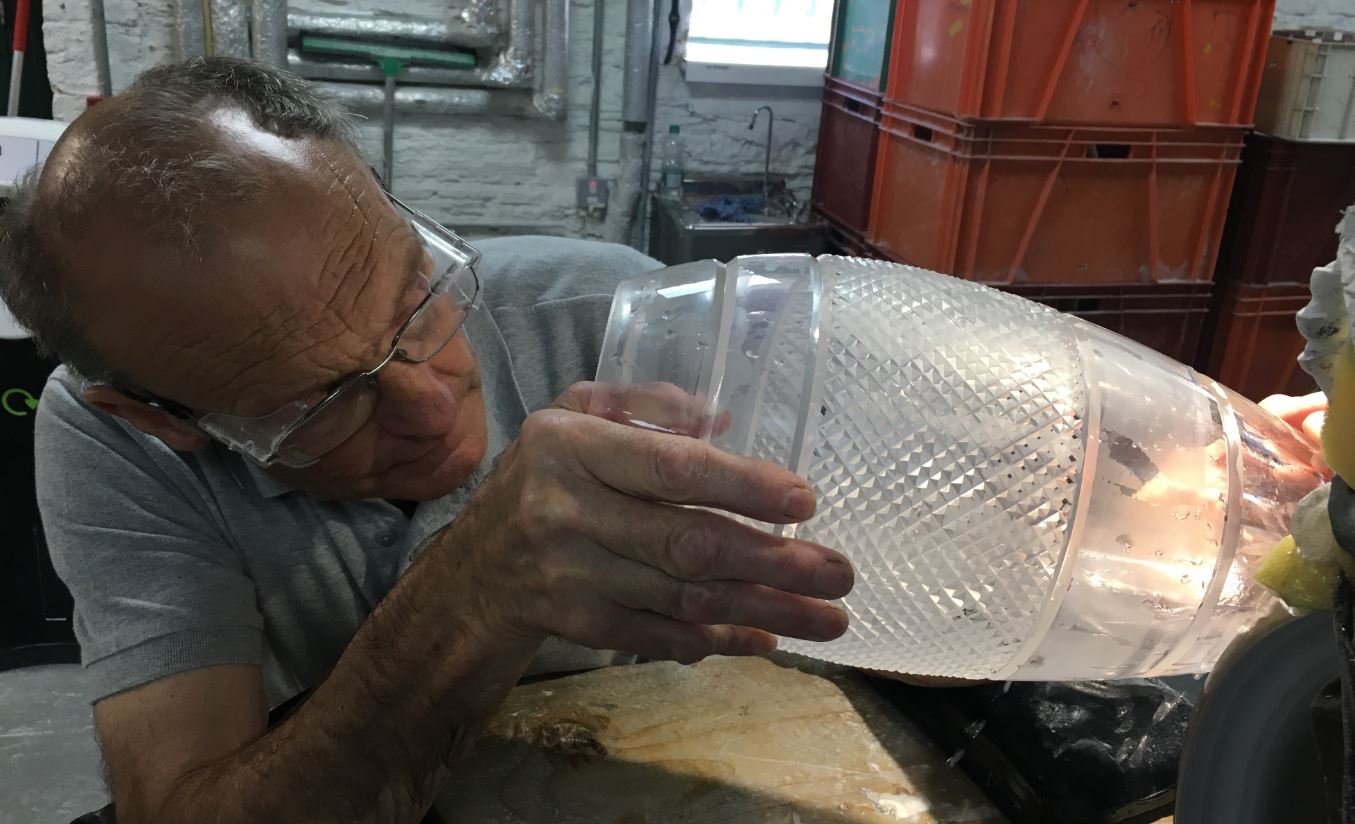 Thirteen apprentice cutters to each bench, in the cutting shop, John was mentored by Jimmy Cusack, John says “You meet a few people in this life that have a profound effect on your life and Jimmy Cusack was one such person, an amazing mentor”, Jimmy taught John all the basic skills to become a craftsman. John qualified as a Rheintour (Flat) Cutter after five years of an apprenticeship and a further three years before he became a Master Cutter. John says the day he qualified as a flat cutter is one of the highlights of his time in Waterford Crystal.

The test piece for the flat cutters was a Royal Tara Decanter or a (606 as the craftsmen would say), the entire piece is a series of flat cuts, each cut, cut twice, first cut on a rough diamond wheel and then refined on a smooth diamond wheel individual 50 individual cuts and eight wheel changes. Johns name and the date was placed on his exam piece and presented to him on qualification, a piece that has pride of place in his home. John recalls with great sadness the day Waterford crystal closed in 2009 this sadness was replaced with great happiness when the factory reopened here on the Mall in 2010, he says “I felt honoured and privileged to become part of the revival of Waterford Crystal, it felt great to be back doing what I do best hand cutting crystal”. 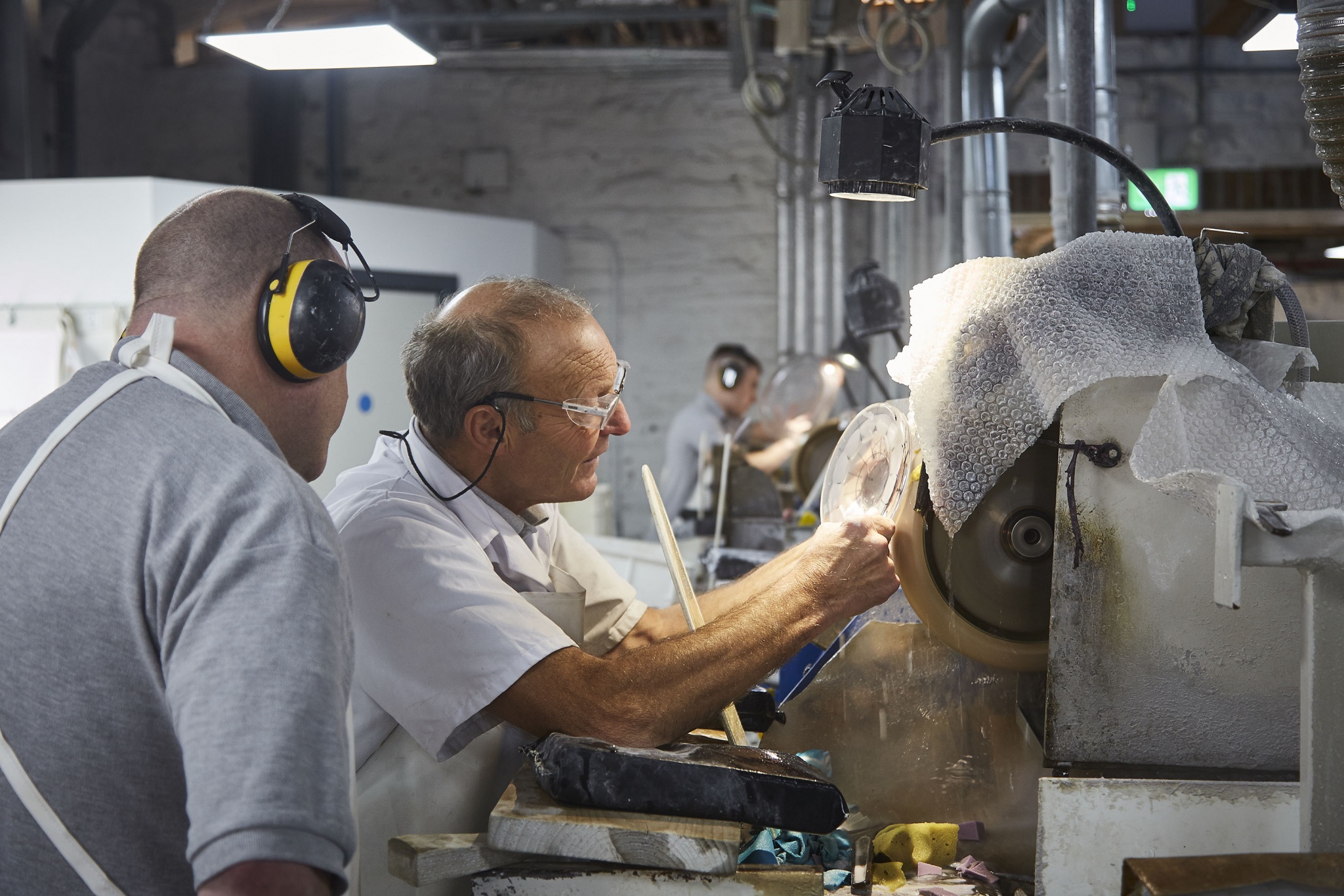 John has always taken pride in his work, something his father instilled in him, capability and intent have brought him through the rest of his journey in Waterford Crystal. Some of the favourite pieces John has worked on down through the years are the spectacular trophies, the Irish Budweiser Derby, the Honda Classic, Shell Houston, the Pebble Beach and the Solheim Cup. John worked on these trophies and gets a great sense of achievement knowing that the trophies he works on here in the factory are treasured by people from the worlds of sport and entertainment.

In the countdown to the Millennium, Waterford Crystal launched the most successful champagne flutes to date, starting in 1995 a different themed pair of flutes was launched each year, bows for happiness, hearts for love, stars for health, wheat sheaf’s for prosperity and doves for peace. Each champagne flute stem was cut by the flat cutters, using the rough and smooth diamond wheels.

These flutes were limited edition pieces, the moulds were destroyed when they were completed. John remembers the excitement this collection created in the factory, he loved the tag line they were marketed with “Buy now or wait another 1,000 years!!” John like a lot of the workers, decided to purchase the full collection. Having this collection means a lot to John” The flutes are a permanent reminder of the pleasure of being involved in something that caused a real stir all over the world when they were launched, and to have been a part of the team that created these flutes was something very special”. 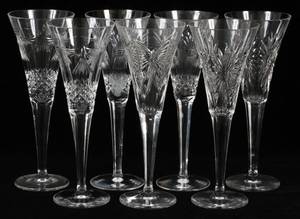 John also has a real fondness for the Royal Tara collection as this collection is entirely cut on the flat wheels, the flat cut would traditionally be seen as a complimentary cut to the more prominent wedge cut, so the Royal Tara breaks the rules a little with this beautiful series of flat cuts each incision done twice using rough and smooth wheels. This very precise work appeals to John’s passion for perfection in his work. John says he loves, “Making a very ordinary cut transform into an extraordinary piece”.

Even in planning his retirement John is measured and precise, on the 23rd of June this year, exactly 49 years to the day John started working in Waterford glass he will cut his final piece of crystal here in the House of Waterford Crystal. John has met and chatted to thousands of visitors to the factory the two that stand out for John were Mary Robinson (Former Irish President) and John Hume (Irish former politician from Derry, Northern Ireland who was co-recipient of the 1998 Nobel Peace Prize, with David Trimble).

On reflection on spending 49 years cutting crystal and meeting people from all walks of life, John says” I have loved it all, the time has just gone by so quickly, I will be sad to leave but I have had the privilege to work among great colleagues and made lifelong friends along the way, these were the people that really made a difference on my journey”.