The visit to Ireland of US President John F Kennedy 50 years ago was a pivotal moment in Irish history and was celebrated by a series of events in Wexford hosted by the Irish Government and Failte Ireland. One of the main highlights of the JFK50 programme was the lighting of the Emigrant Flame in New Ross, County Wexford. The flame taken from JFK’s grave at Arlington cemetery was lit by the Taoiseach and members of the Kennedy family.

On the 17th March 1961, the  Ambassador of Ireland, Thomas J. Kiernan, presented President Kennedy with an arrangement of shamrocks in a Waterford Crystal Oval Bowl at the  White House. The Oval Bowl, then became known as the Kennedy Bowl. To celebrate the 50th anniversary of President Kennedys visit to Ireland, the House of Waterford Crystal hosted a private luncheon, as part of key attractions in the region commemorating the 50th anniversary of the 'Homecoming". David McCoy, Director of Sales & Marketing presented a replica Kennedy Bowl to mark the occasion.

New Ross is the ancestral home of US President John F Kennedy. It was on the Quay of New Ross that his Great Grandfather, Patrick Kennedy, boarded a Famine Ship and commenced his journey for America. President John F Kennedy received a rapturous welcome on an emotional visit to his ancestral home in New Ross, County Wexford, Ireland on 27th June, 1963. 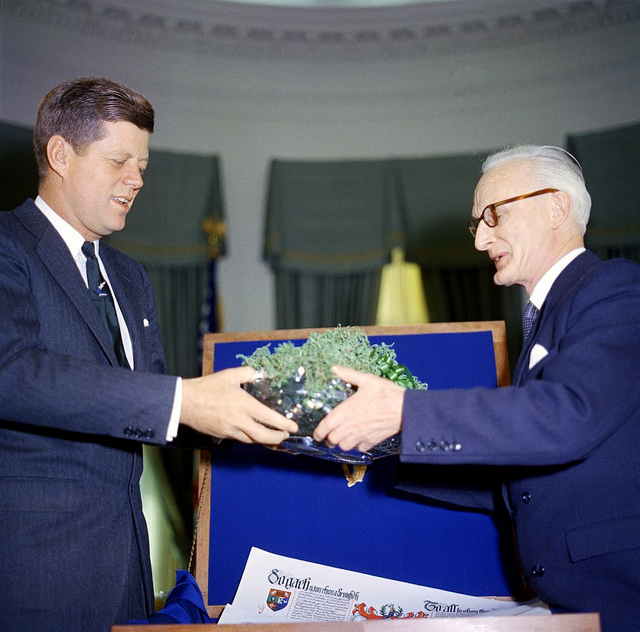