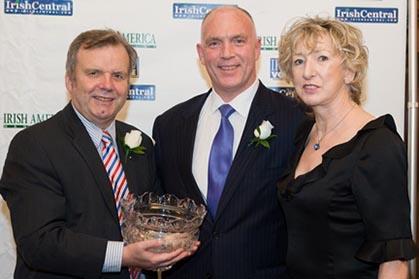 Irish America magazine, the leading glossy publication of Irish interest in North America, celebrated the 16th annual Wall Street 50 issue and honorees. The event, held in New York with the support of Titanic Quarter in Belfast, recognized the best and brightest Irish and Irish-American leaders in finance.

In addition to his fellow honorees, the event honored the outstanding achievements of Keynote Speaker Jim O’Donnell, global head of investor sales and relationship management at Citi. Mr. O’Donnell is responsible for the distribution of global markets products to Citi’s equities, fixed income, currencies and commodities clients.

Founding Editor-in-Chief Patricia Harty and Founding Publisher Niall O’Dowd presented O’Donnell with a King’s Bowl from the House of Waterford Crystal. The dinner featured remarks from O’Dowd, Harty, David Gavaghan, First Ministers Robinson and McGuinness, and Suni Harford, Citi’s regional head of markets for North America, who introduced O’Donnell before his keynote address.
Patricia Harty said “We salute these women and men as much for their community activism as we do for their financial acumen. These are the leaders who will help shape the culture, history and destinies of our countries in the coming decades.”

During the awards reception, Founding Publisher Niall O’Dowd presented New York City Police Commissioner Ray Kelly with a House of Waterford Crystal vase as a sign of appreciation from the New York Irish-American community for all that he has done during his years of service.