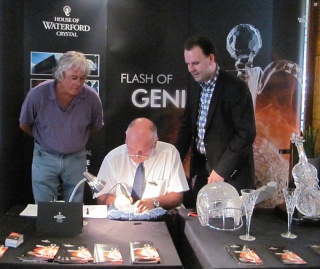 The renowned Travel Classics Writers' conference took place in Dublin on the 23rd to 26th of June. This was the 18th consecutive year of the conference, regarded by many as the world's foremost networking event for travel writers and editors. The House of Waterford Crystal was a gold sponsor of the event. Over the four days, Master craftsman Pat Boyce presented four cutting demonstrations to 60 editors & journalists. The House of Waterford crystal also displayed the Solheim Trophy and some of its Prestige pieces including a sculpted violin and an eagle in flight.

The Travel Classics Writers' Conference, hosted by Tourism Ireland, will bring vast exposure of all that Ireland has to offer for holidaymakers in our second largest tourism market. The conference, took place at the Conrad Hotel, and brought together celebrated editors from a wide range of high profile magazines including National Geographic Traveller, Travel and Leisure, Saveur, Islands magazine, AARP and Forbes Life, all of which reach hundreds of thousands of readers across North America as well as globally.

The keynote speaker at the conference was Pauline Frommer, of the famed Frommer travel guidebooks. Ireland was voted 'favourite holiday destination' for 2011 by readers of Frommer's guidebooks, beating Paris which came in second place.