The House of Waterford Crystal were the proud sponsors of the Good Food Ireland Awards 2012. The Awards, now it their 5th year, celebrate the excellence in food experience and reward businesses for their outstanding commitment to providing an unmatched level of service to their customers.

Over 300 guests including hoteliers, restaurateurs and artisan food producers were in attendance for the Awards, which are now a firm fixture in the food and travel awards calendar. RTÉ’s Mary Kennedy hosted the Awards Ceremony, which was also attended by An Taoiseach Enda Kenny. Speaking at the Awards, Mr. Kenny said, "I am delighted to congratulate the winners of Good Food Ireland Awards 2012. Each winner showcases the unique taste and flavour of indigenous Irish foods, which is delivered with consistently high quality and our traditionally warm and friendly service to customers.” 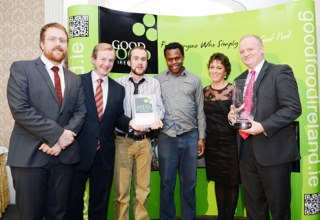 This year’s Good Food Ireland Supreme Award went to Aniar Restaurant Galway, the newest recipient of a Michelin Star and the only Star in the West. The winners were proudly presented with the Certificate of Excellence and the magnificent Waterford Crystal piece as the main prize.