The Haunting History of Loftus Hall

The history of Loftus Hall, a large mansion house located along the Hook Peninsula, goes back through the centuries. The original Hall was built in 1350 by the Redmond family during the time of the Black Death. It was known as Redmond Hall until the 1650's when it was given to English Planters - the Loftus Family - and from then on was known as Loftus Hall. 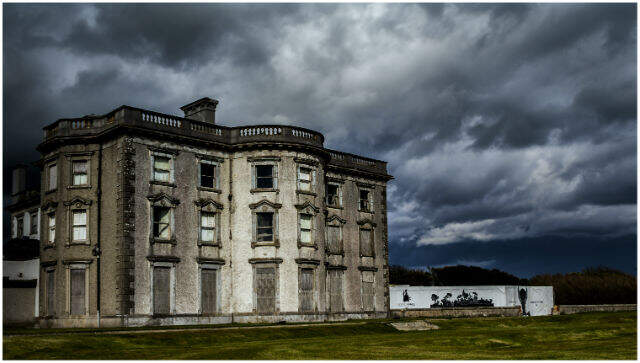 The building which stands today was heavily renovated between 1872 and 1879 in preparation for a visit from her majesty Queen Victoria. The visit never happened, and the Loftus family were left with huge debt following the major work carried out on the building. The last of the surviving Loftus family passed away in 1890 and the bankrupt estate was put up for sale. Over the subsequent years, the building served as a home for the Benedictine nuns, a school for girls run by The Sisters of Providence and at one point even became ‘The Loftus Hall Hotel’ which closed in the early 1900s.

In 2011 the house was sold to its current owners – The Quigley family. The family have secured the structure and are re-generating the walled gardens, the courtyard and house to ensure the future of Loftus Hall for the next generations.

There is an eery story that has stuck with Loftus Hall for many years. According to legend, one stormy night a stranger approached Loftus Hall on horseback and was invited in by the Tottenham family who were living there at the time. The young Lady Anne Tottenham became enchanted by this stranger. One night while playing cards, Lady Anne dropped a card and while bending down to retrieve it, she caught a glimpse of the strange under the table - he had cloven hoofs instead of feet! With that, the stranger shot through the roof in a ball of flames. The story goes on to say that Lady Anne never recovered from her ordeal and was locked in the tapestry room where she died years later. Servants and family members reported seeing her ghost wander the house at night.

Since Loftus Hall was opened to the public in 2012, there has been reports from visitors who claim to have seen and felt explainable things while in Loftus Hall.... would you have the courage to visit?