A Tour Fit For Royalty...

The House of Waterford was delighted to welcome Their Royal Highnesses The Prince of Wales and the Duchess of Cornwall on Thursday 24th March 2022. As part of their Royal Visit to Ireland, TRHs visited Waterford & Tipperary and visited various businesses which incorporated their interests and passions including heritage, farming, equestrian sports and arts to name a few! 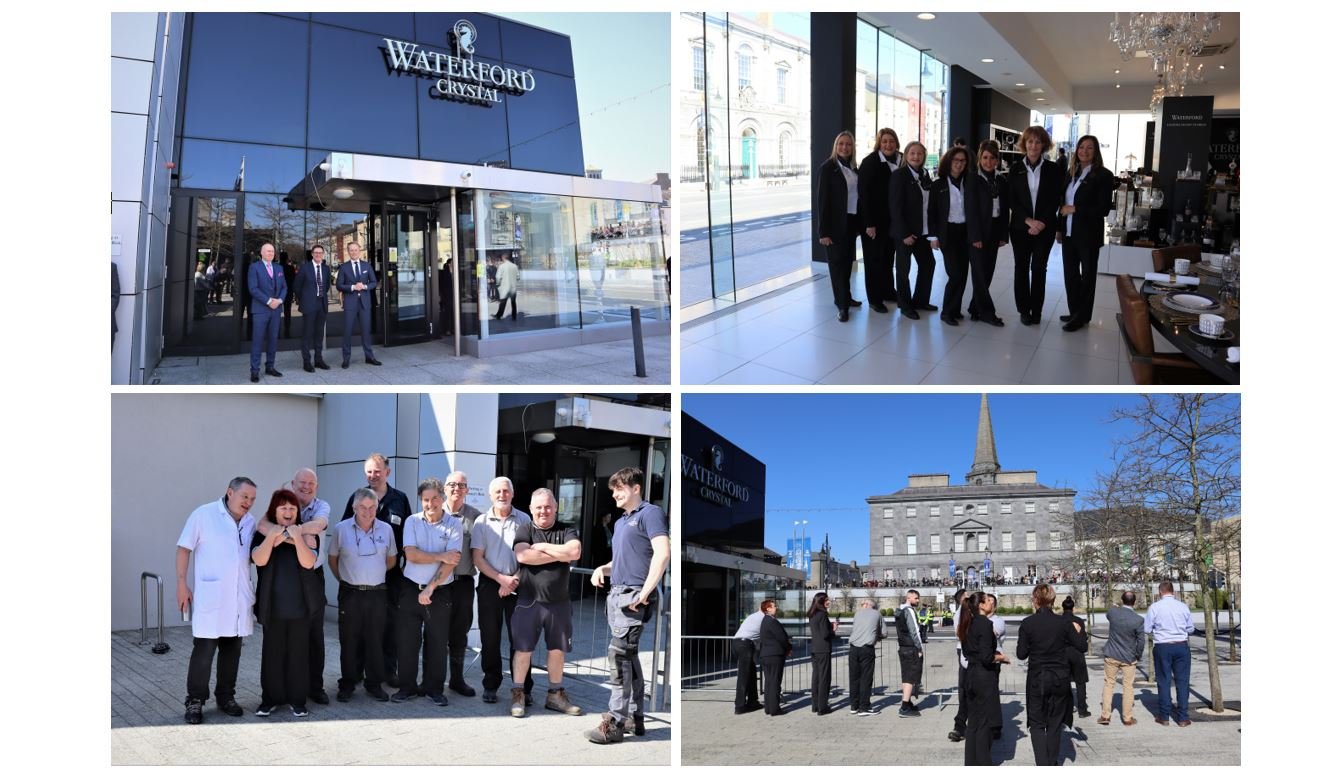 On the morning of the 24th, you could feel the anticipation as our staff made final preparations before the arrival of these very special guests. The place was sparkling, with the added bonus of the wonderful sunny weather outside. Members of the public had lined up behind the barriers opposite House of Waterford to catch a glimpse of the special guests – it’s not often that Waterford is visited by royalty. Security was tight - guards lined the streets, with some on horseback and even on rooftops!

On arrival, The Royal Highnesses took the time to meet and shake hands with many of our staff who had lined the entrance to our factory. They were then welcomed by Dermot Barlow (Factory Manager), Andrew Macer (VP, Sales, UK, Ireland & Hospitality) and Sjoerd Leeflang (Vice President, Business & Offering, English & Crystal Brands) before commencing their tour.

First they were introduced to the history of our Waterford brand with Lupeta Burke, Our Factory Tour Team Lead. Lupeta discussed Waterford Crystal’s history of more than 200 years and the visionary characters behind its evolution.

They were then handed over to Clare Barrett, Business & Customer Support Manager, and Sharon Murphy, Tour Operations Manager, whom guided them through our factory for the tour. 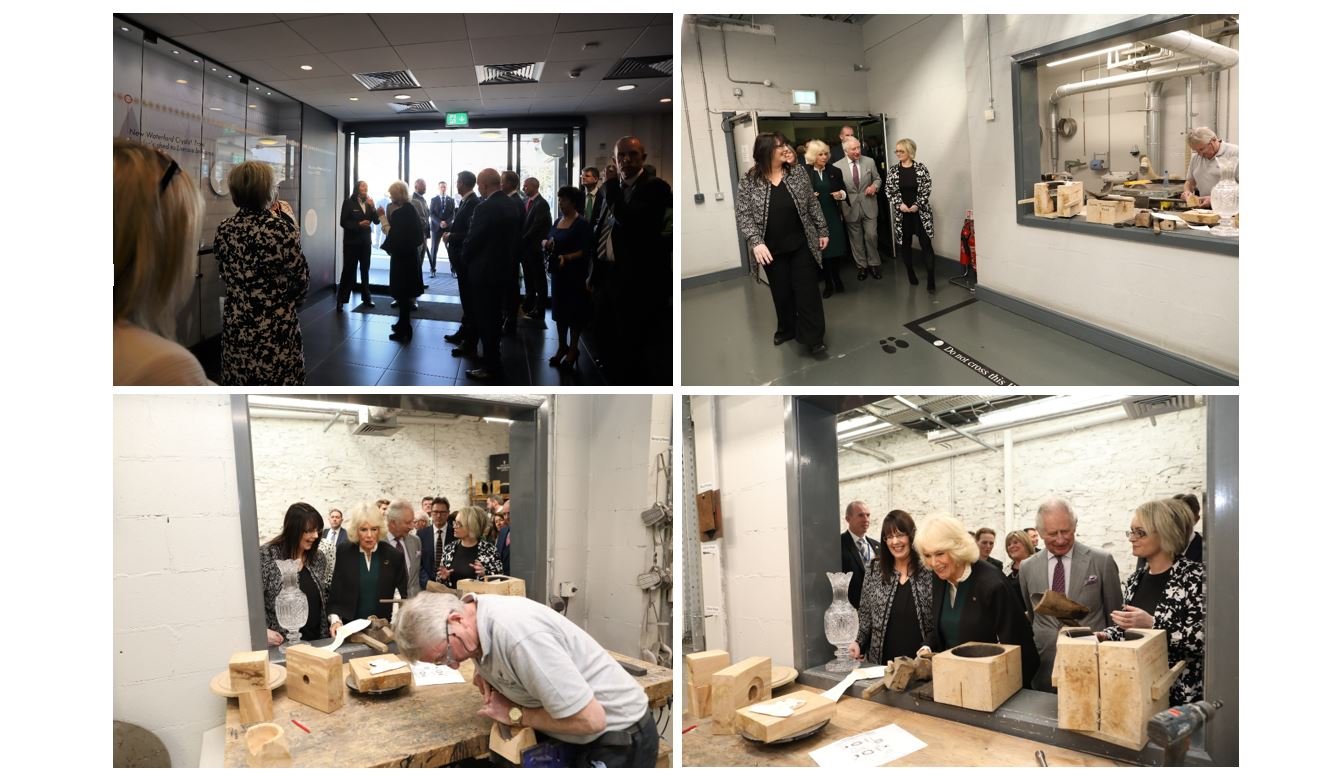 On arrival to our mould-making area, Master Mould Maker John Keane was preparing a mould for the Solheim Cup trophy. The Royal Highnesses seem very keen to learn the different techniques involved in this ancient craft and to hear that on occasion when a tree falls at Lismore Castle, we are notified and the beech wood can later be used to craft our moulds.

Next, they headed to the Blowing Platform – where TRH’s witnessed the magic of our molten crystal being transformed into beautiful shapes. While Clare & Sharon explained the different stages, they watched as the team, including Adrian Tutty, Kieran O'Connell, Edgar Evans & Evan Casey, were working on stemware.

Talking with Edgar, His Royal Highness was interested to learn that Edgar’s father had also worked at Waterford as a blower. Usually many of our craftspeople have a family history of working at Waterford.

At the Quality & finishing department, TRH’s had an aerial view of our team removing the caps of various pieces, and smoothing both the edges and bases of various products. The Prince and Wales and Duchess of Cornwall then had the opportunity to smash a rejected piece – once smashed it is re-melted and recycled to be made into something new. His Royal Highness seemed apprehensive about smashing the beautiful large designer studio vase, but Clare explained it had a large crack down the side which occurred during the cutting stages and so it would have to be broken and made again! He seemed to enjoy it!

Next up, TRH’s visited the marking dept, where they met craftsman Richie and had a chat about his career. When His Royal Highness asked Richie why he decided to work in the marking department, he replied ‘It’s a handy job to get to retirement!’ – they all had a great laugh.

Moving on to the cutting department, Their Royal Highnesses stopped to speak with many of the team, including TJ Grant, Philip Coffey, David Boyce, Tony Grant and Alan O’Keefe.

Their Royal Highnesses had the chance to give crystal cutting a go. Our craftsmen Chris Phelan and Bernard O’Brien showed them how to cut a classic star at the base of a tumbler and explained the various techniques used when making our products. Examining His Royal Highness Prince Charles’ work, Bernard exclaimed ‘You can start tomorrow!, to which the whole room erupted in laughter.

Next they entered the final area of the tour – the sculpting and engraving departments. Here they spoke with many of the team – Pierce McGrath, Martin Barron, Kate Swift, Dennis O’Connor, Michael Murphy, Pat Brophy & Kenny McEvoy, all of whom work on many bespoke pieces and world sporting trophies. 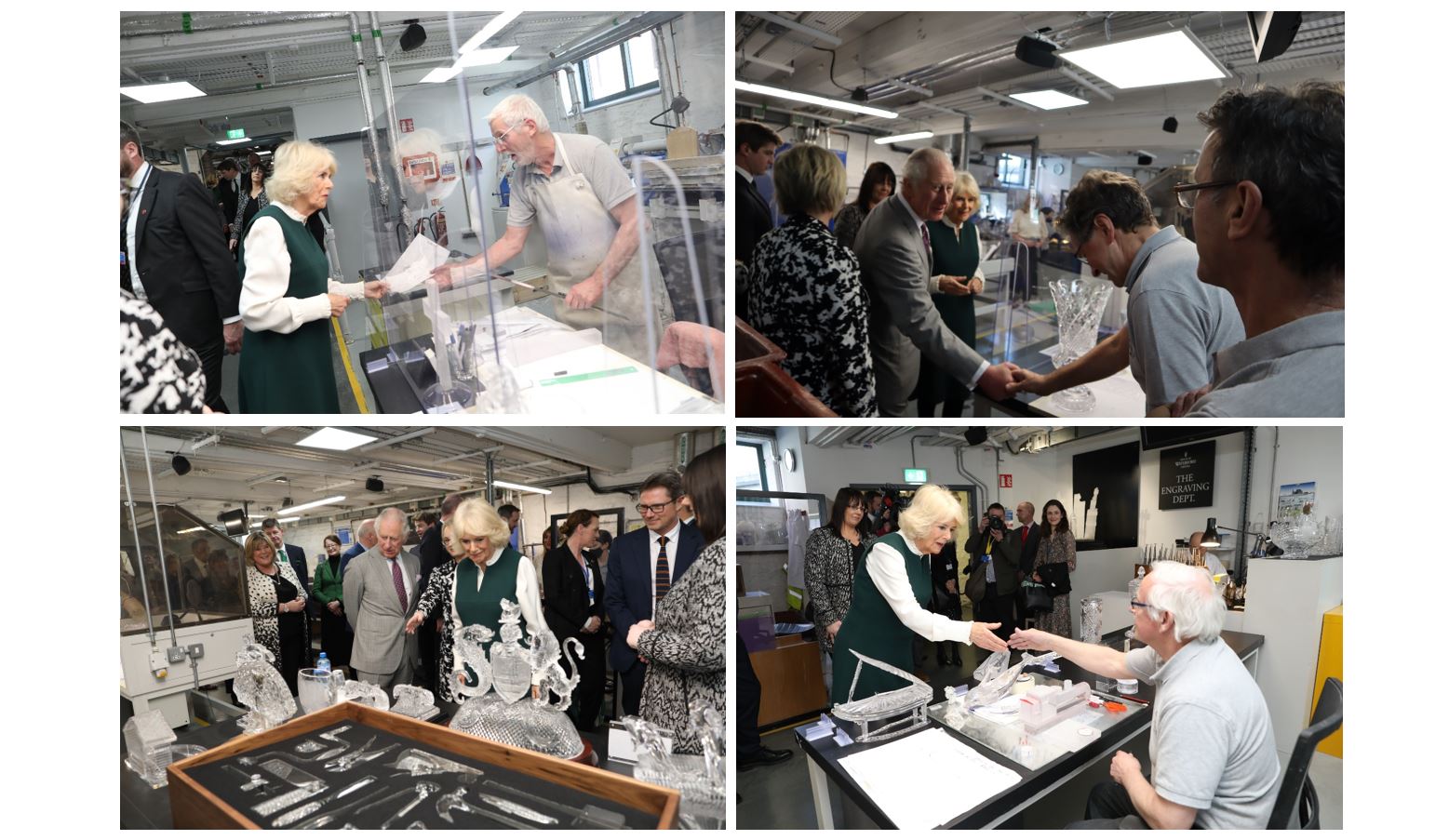 Master Sculptor Michael Murphy was working on the base of a Designer Studio Footed Vase, one that His Royal Highness has smashed in the quality department earlier in the tour. Michael showed him what the finished piece would look like and TRH commented that it is a beautiful craft.

Her Royal Highness, The Duchess of Cornwall, was fascinated by the display of our various bespoke & sculpted pieces, One of which was a piece that commemorated the 60th Anniversary of Her Majesty Queen Elizabeth's coronation. Spotting our crystal telephone, Her Royal Highness exclaimed ‘You don’t see these anymore!’.

She spoke with Master Sculptor Kenny McEvoy and Master Engraver Pat Brophy, both explaining what they were working on. 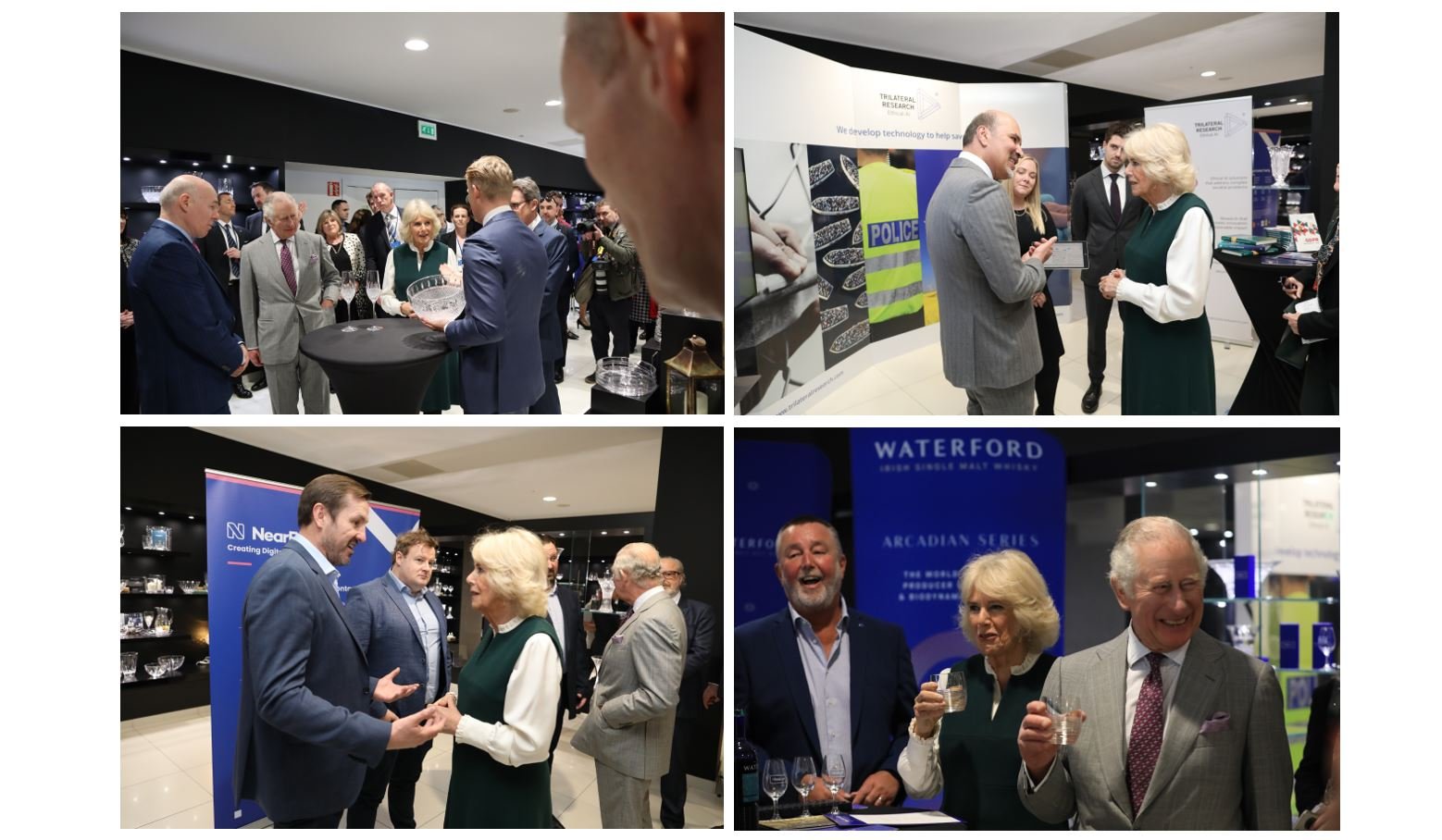 When the tour was finished, Their Royal Highnesses emerged to the House of Waterford showroom, where the team was waiting to present them with a gift to commemorate their visit. They were given with a beautiful pair of Irish Lace flutes and an Irish Lace bowl before a group photo was taken with the team. The Irish Lace collection features a cut crystal pattern that mimics the fine detailing of the bobbin and thread used to produce the elegant patterns of Irish Lace, steeped in Irish history and age-old craftmanship.

A selection of local Waterford businesses including Trilateral Research, NearForm and Waterford Whisky were on hand to share what they do.

TRH’s samples some Waterford Whiskey before they left to move on to the next stop on their visit to Waterford!

It was definitely a day to remember for all of the team at House of Waterford! 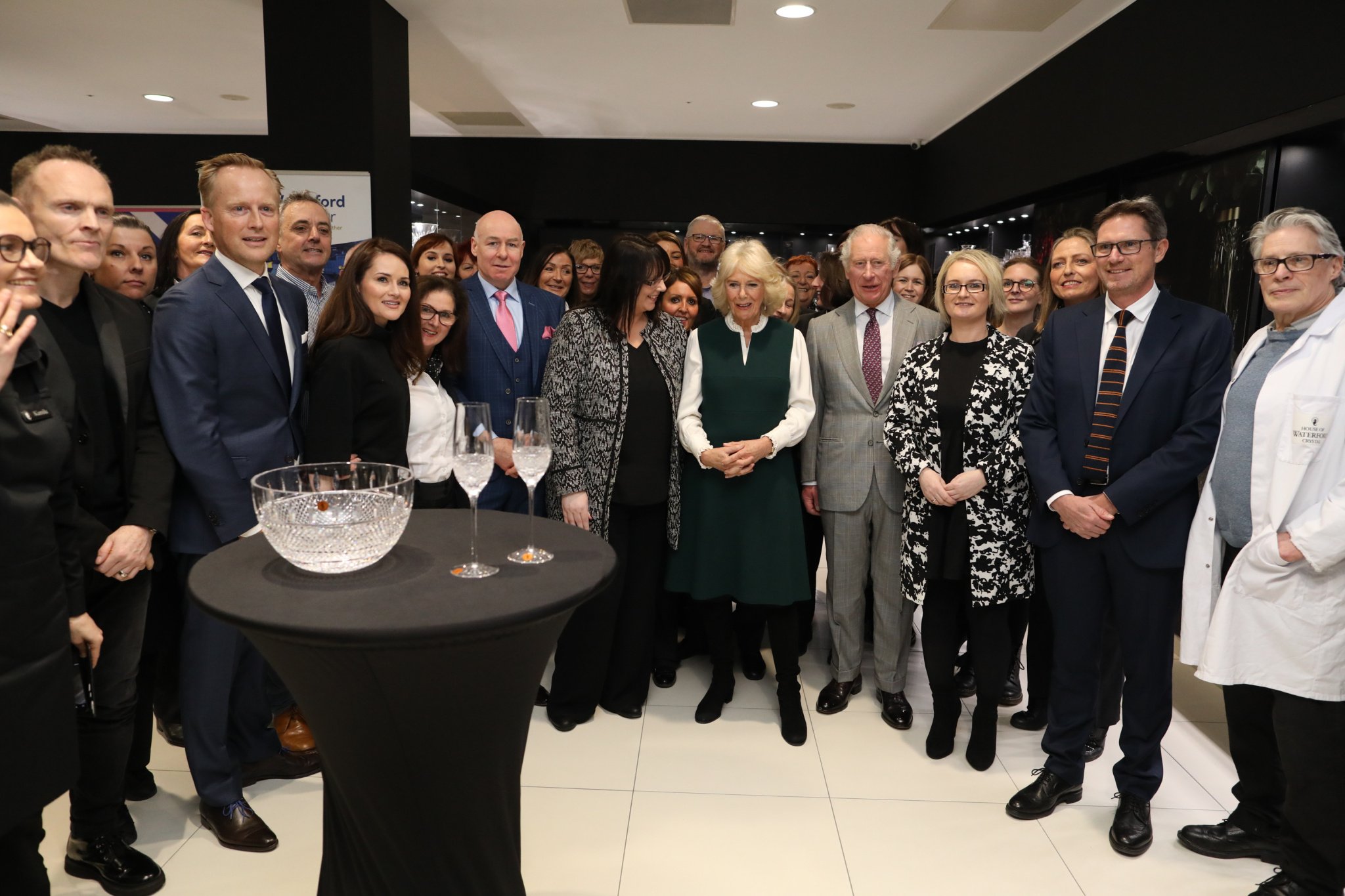