An evening with Neven Maguire at the House of Waterford Crystal

Join us at the House of Waterford Crystal, where we will host a signature event in conjunction with the Waterford Harvest Food Festival on Wednesday September 12th.

Renowned chef Neven McGuire with host a wonderful evening with a gourmet cookery demonstration in the luxurious surroundings of the House of Waterford Crystal, where he will cook recipes featuring local produce.

Guests will be treated to wine and canapés inspired by Neven and produced by  the WIT Culinary School at 7:30 pm. 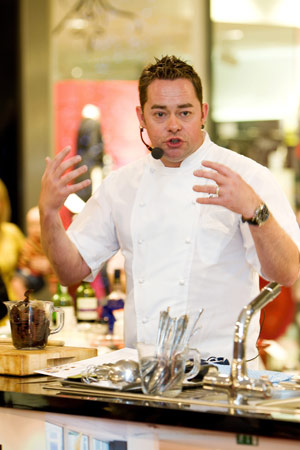 "Make Every Meal a Masterpiece"

From a very young age, one of Neven's favourite pastimes was to shadow his mother in the kitchen, watching her cook; his pastime soon became his passion, as he began experimenting with ingredients in the home kitchen at the tender age of 10, a passion that only intensified as Neven went through his teenage years. No one was surprised in 1992 when Neven enrolled in Fermanagh College, Enniskillen to study catering, where he received the prestigious Student of the Year Award. Even then, his vision was clear - to share his love and passion for food with as many people as possible.

In 2001, Neven took over the family business, and turned a local restaurant into a national phenomenon. Located in the rural village of Blacklion in Co. Cavan, MacNean House and Restaurant has become one of the most talked about and frequented restaurants in the country.

All proceeds in aid of Waterford Hospice