The United States recorded their biggest victory over Europe in two decades and continued their near invincibility on home soil to retain the Solheim Cup in Iowa on Sunday August 20th. The U.S. won by five points -- 16-1/2 to 11-1/2 -- the same margin as they started the final day in front of large and enthusiastic galleries at Des Moines Country Club.

Waterford Crystal trophies have long been associated with supreme achievement throughout the world of sport, and especially with the royal ancient game of golf. This seems to me a most appropriate association, in that the skills of the master artisan reflect, in an artistic context, the sublime qualities of the champion golfer - most notably, superb hand-eye coordination, a relentless quest for excellence and the natural extension of individualism via the tools of the trade.

Richly decorated with deeply incised patterns, The Solheim Cup trophy demanded the highest standard of workmanship from our Master Craftsmen of three great crafts of crystal smaking – blowing, cutting and engraving. Using a technique  that has hardly changed since the Middle Ages, the centre panel features a superb intaglio engraving of The Solheim Cup logo, which was designed to incorporate the trophy. And so evolved one of golf's beautiful prizes, born of fire and sand, proudly crafted with loving attention to detail by master artisans, designed to last forever, and now instantly recognizable as the symbol of one of the game's grandest events. 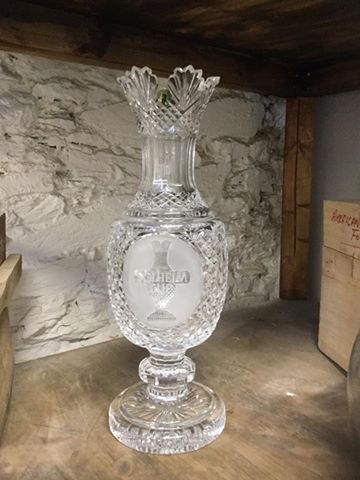 The Cup itself has enjoyed many wonderful moments in its brief lifetime. In addition to being raised high in the air at closing ceremonies by the winning captains of each Solheim Cup event, the Cup has been inspected by airport security personnel prior to trans-Atlantic trips on several occasions. It has flown in the cockpit of the Concorde. In addition, it has been cuddled like a baby in the arms of a hotel general manager who stored it overnight in his safe.

The Solheim Cup is quite heavy, weighing more than 20 pounds. Its overall height, including the mahogany base, is 19" inches. The top diameter of the cup is slightly larger than a golf hole - 4" inches - while the base diameter is 8" inches. A slightly smaller replica of The Solheim Cup has been created by Waterford and permanently resides at the Nicklaus Hall in the Muirfield Village Golf Club clubhouse, Dublin, Ohio. It is in stellar company, displayed along with trophy replicas of the Ryder Cup, the Masters, U.S. Open, PGA Championship, British Open, The Memorial, The Tradition, PGA Senior Championship, USGA Senior Open Championship and the PGA Tournament Players Championship.