2012 Viking Marathon launch at the House of Waterford Crystal

Dublin, Cork, Limerick, and Belfast have one, and now Waterford can be added to that list. The 30th June 2012 sees Waterford host the first ever marathon in the South East region. In keeping with the city’s great Viking history the Marathon will be named Waterford Viking Marathon (WVM). Organisers estimate it will attract over 1000 + runners bringing a welcome boost to retailers and accommodation providers in the city.

Speaking at the launch in Waterford Crystal on Saturday last Chairman of WVM Des Whelan said “This is a unique and first off event for Waterford city and one which we hope will grow in the years ahead. It’s a great opportunity for people to embrace a healthy lifestyle whilst also supporting charities of their choice; we in WLR FM are delighted to get behind this event. As title sponsor our involvement will make it possible to promote this great sporting event to our listening audience both city & county and we certainly share the vision and aim of the organisers to grow this marathon year on year” he went on to express his heartfelt thanks to everyone involved and to acknowledge the main sponsors who have come on board; Waterford City Council, Failte Ireland, Waterford Crystal and Lucozade. The event which starts on the Mall and takes in the streets of Waterford city before heading to Tramore and finishing in the Regional Sports Centre in the city is sure to attract participants from all over the country. 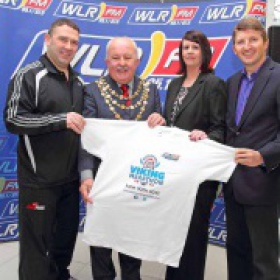 Outlining the Route Des also stated that this full Marathon which is 26 miles will also have a half Marathon and relay option so a good incentive for people of all levels of fitness to get involved. The Marathon has two designated Charities for 2012, Waterford Alzheimer’s society and Waterford Hospice. Excess funds from the running of the event will be donated to both.

Also speaking at the official launch Mayor of Waterford Clr Pat Hayes said “ This is a first for Waterford and following on from the city’s other tourist initiatives, this marathon will help to promote our wonderful Viking city both regionally and nationally and keep Waterford firmly positioned at the forefront”.

Concluding John Tracy, Chief Executive of Irish Sports Council of Ireland complimented the organisers and assured them of his continued support. “It is fantastic that the South East now has its own marathon and one I am sure that will grow in numbers year on year” he encouraged all runners to “ put on your running shoes and take part in what promises to be a most challenging and worthwhile event”